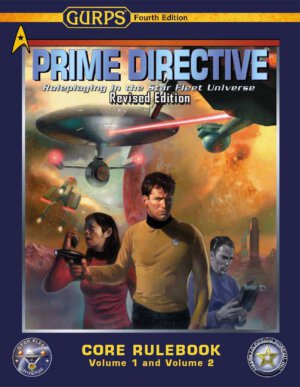 Amarillo Design Bureau has released an updated edition of their StarFleet roleplaying system for the fourth edition of GURPS. Prime Directive is a classic take on the famed SF setting featured in Star Fleet Battles and Federation Commander. You can score the 366 page PDF from DriveThruRPG for $39.95.

Long in coming, GURPS Prime Directive 4e has been revised. This massive book (now 365 pages) has everything you need to game in the Star Fleet Universe.  Powered by GURPS, this book includes information about the species inhabiting the Alpha Octant of the Milky Way Galaxy, including “normal” height and weight ranges. Information about the species of the Inter-Stellar Concordium has been greatly expanded from the original edition. Academy templates are included for characters who are part of the Federation.

Also expanded are the lists of advantages, disadvantages, and skills found in GURPS. We have chosen the ones we feel are best suited for the Star Fleet Universe and think you can play with just these; however, more are included in GURPS Basic Set Characters. When we reference one of these advantages, disadvantages, or skills it will be clearly marked. (These are mostly references to magic and the supernatural which were omitted as not germane to the Star Fleet Universe.)

The chapter on how to play the game has been greatly expanded so that you have most of the rules you need to play at your fingertips. “End Game Rewards” now includes information on how to better skills, add advantages, or buy off disadvantages. It also has information on medals and honors (and perhaps promotions!) to be awarded by a grateful Star Fleet to successful characters.

The section on technology has been expanded to include information on so many inventions that various empires have developed. You can explore from Jindarian anti-transporter fields to Tholian webs. Personal equipment runs the gamut from air masks to zero-G worksuits. Charts for weapons have been expanded to include weapons that more primitive societies might use, as well as weapons you would find in the Star Fleet Universe.

There is plenty of background information on the Star Fleet Universe including how fast you can travel, interesting spots to visit, and how to use your characters in battle if you play Star Fleet Battles or Federation Commander.  The deck plans for a Free Trader ship is included so that if your characters are independent operators, you can visualize the ship they most likely use.  Want to know what happened when? Check out the extensive timeline.

New to this book is the chapter on space combat. The ships of the Star Fleet Universe were designed to interact with each other via the Star Fleet Battles or Federation Commander rules. However, we realize some GMs may prefer to use the native GURPS system for starship combat. To do that, you will need GURPS Spaceships (4e) and may also want to have GURPS Space (4e) available as the rules reference those two books. Descriptions and stats for the standard large freighter, Free Trader, security skiff, Federation heavy cruiser, Klingon D7 battlecruiser, Romulan War Eagle, Kzinti command cruiser, Gorn Allosaurus Battlecruiser, Tholian patrol corvette, Orion Pirate light cruiser, and the standard administrative shuttlecraft are included.

Finally, the story “Rescue on Roon” has an adventure to play. Included are sample characters that can be used.  Also included is an index to the entire book,  along with an index to charts and tables that are frequently used.