Next month sees a trio of new Starfinder releases from Paizo Inc. Each of these titles are slated to arrive on or about November 10th. 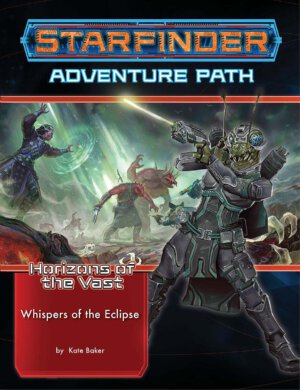 Starfinder Adventure Path #42: Whispers of the Eclipse (Horizons of the Vast 3 of 6)

Answering a call for help from a neighboring group of settlers, the heroes embark on a rescue mission that takes them to a hidden jungle valley, where alien dinosaurs prowl among ancient elven ruins. The trail leads through a magical portal to an abandoned Azlanti base on the world’s moon. There, survivors from a scouting mission gone awry huddle in the darkness, hiding from a terrifying, malevolent creature from another plane!

“Whispers of the Eclipse” is a Starfinder Roleplaying Game adventure for four 5th-level characters by Kate Baker. This adventure continues the Horizons of the Vast Adventure Path, a six-part, bimonthly campaign in which the heroes are at the forefront of exploring and charting a newly discovered world filled with mystery. This volume also includes a history of the diaspora of the elves, gear from an ancient spacefaring civilization, and a selection of diverse alien creatures.

Each bi-monthly full-color softcover Starfinder Adventure Path volume contains a new installment of a series of interconnected science-fantasy quests that together create a fully developed plot of sweeping scale and epic challenges. Each 64-page volume of the Starfinder Adventure Path also contains in-depth articles that detail and expand the Starfinder campaign setting and provide new rules, a host of exciting new monsters and alien races, a new planet to explore and starship to pilot, and more! 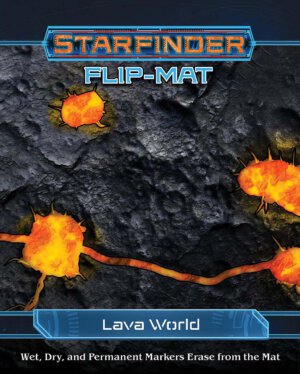 Whether the heroes are surveying a moon dotted with erupting volcanoes or fighting on unstable islands in the middle of an active lava flow, no Game Master wants to spend time drawing every volcanic rock outcropping and lava fountain. Fortunately, with Paizo’s latest Starfinder Flip-Mat, you don’t have to! This line of gaming maps provides ready-to-use science-fantasy set pieces for the busy Game Master. This double-sided map features a river of lava cascading down a cliff face on one side and a bubbling lava lake filling a crater on the other. Don’t waste time sketching when you could be playing. With Starfinder Flip-Mat: Lava World, you’ll be ready the next time your players discover that the ground is lava! 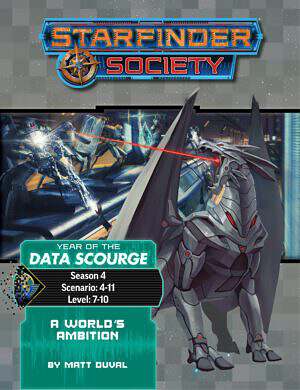 The effects of the Data Scourge attacks are still felt across Absalom Station and the Pact Worlds, and the First Seeker is constantly seeking solutions. After hearing a rumor of Scourge-resistant technology on a distant world seeking Pact Protectorate status, Ehu Hadif arranges for a team of Starfinders to accompany the delegation of Stewards and Xenowardens to review the world’s petition. On the record, the Starfinders are concerned with evaluating the planet’s ruins, but Ehu hopes they can learn about the mysterious technology supposedly being developed by the colonists. Missions are rarely so straightforward, however, and the PCs must contend with an overreaching church, their fellow diplomatic delegates, and dark secrets buried just beneath the surface of the colony’s outwardly placid society. Will this world reach its ambition and become part of the Pact Worlds, and does it really have access to technology that could help combat the Data Scourge? Most importantly, will the assigned agents survive their “diplomatic mission?”