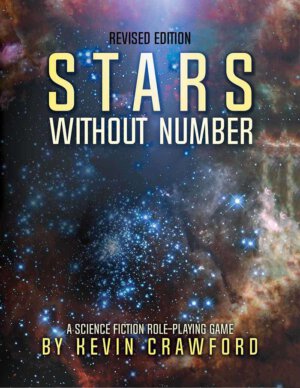 A new and revised edition of the popular science fiction RPG Stars Without Number has arrived on the scene from Sine Nomine Publishing. I looks like there’s plenty of gaming goodness, and plenty of options to custom tailor the system to your group, packed in the corebook’s 324 pages. You can score the full color PDF for $19.99 through DriveThruRPG and, as with prior SWN releases, you can get the text only version absolutely free.

The year is 3200 and mankind’s empire lies in ashes.

The Jump Gates fell six hundred years ago, severing the links between the myriad worlds of the human diaspora.

Now, the long isolation of the Silence falls away as men and women return to the skies above their scattered worlds.

Will you be among them once more?

Stars Without Number: Revised Edition is an old-school-inspired game of sci-fi adventure, one built from the ground up to encourage sandbox play and simplify a GM’s job in providing it. Familiar mechanics are employed to forge new worlds and explore new possibilities, guidelines built on long experience used to help a group venture in wholly new directions. Within the full-color pages of Stars Without Number: Revised Edition, you’ll find… .

And these things? They’re all in the free version. Yes, just like the original edition, Stars Without Number: Revised Edition has a free PDF edition to share with your friends and pass around to interested parties. Those daring stellar freebooters who purchase this deluxe version will get…

So leap forward, brave adventurer! The stars await you, and the wild glories of an untamed sky!