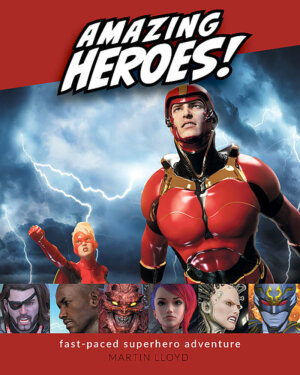 Author Martin Lloyd has released a new game in the Amazing Tales series and this time around superheroes are the focus. Amazing Heroes is a family friendly game designed to bring four color comic action to your tabletop. The book is available at DriveThruRPG as a 131 page premium hardcover for $19.99 or in PDF for $11.95.

Pull on your mask and cape, because it’s time to be a hero!

Amazing Heroes builds on the simple and quick Amazing Tales rules to create a superhero game that brings thrilling, and fast paced action to the table for players aged eight and up.
With flexible rules that let you create any superhero you can imagine, and straightforward mechanics for handling everything from villains and teamwork to equipment and allies Amazing Heroes puts the focus of your superhero adventures where it should be – on the action!

Amazing Heroes is a lavishly illustrated book in four parts

Part one: How to be a hero contains all the rules you’ll need to create heroes and fight villains.

Part two: Running the show is packed with advice and additional rules to make your superhero games as awesome as possible.

Part three: Storm City is a complete setting for Amazing Heroes. Learn about the districts, factions and threats that make up this city.

Part four: Adventure Time Amazing Heroes comes with two complete adventures. Rise of the Behemoths pits the heroes against a mad scientist and his giant creations. The Comet is Coming opens up a world of supernatural adventure as the approach of a comet awakens an ancient evil.

You’ll find Storm City on the west-coast of the United States, in the shadow of Big Thunder, a dormant volcano. It’s home to four million people, NFL and NBA teams, an overworked police department, an ivy league university and a host of biotech startups. Crime in Storm City is the hands of four shadowy families, but bigger threats loom from the labs of the city’s scientists, alien races, the supernatural forces of the abyss, and even those who dwell beneath the city.

Storm City is also home to heroes. You’ll find five detailed in the book, all ready to play as characters.