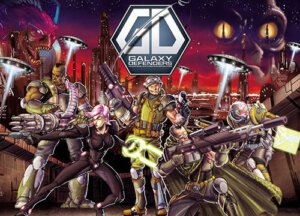 With less than a week to go in the Kickstarter project for Galaxy Defenders, from Ares Games, I thought it would be a good time to take a sneak peek at the game. I received a demo edition of GD late last week and it’s important to keep in mind my evaluation is based on a preview edition and not anything that’s remotely the same quality of production which will be found in the finished product. Needless to say I believe we can expect the same top notch work as we’ve seen from Ares Games in the past when GD ships to backers and hits the market.

Galaxy Defenders is a game which is heavily inspired by science fiction movies of the 1980s and 90s and sets up to five players together in a cooperative battle against alien invaders. The game is tactical in nature and each player controls one of the special agents recruited for the mission. The missions themselves will be story based and contain various major and minor events as determined by the event deck. 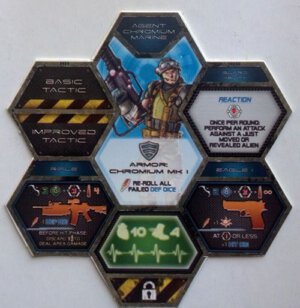 To begin each game the players will choose (or randomly select) their agent as well as their tactics and load out based on the mission being played. This means although the overall nature of each specialist remains the same what they bring to the table each time out can be greatly different. The agent breakdown is as follows:

Biotech – Sort of the medic of the team as they can use nanotechnology to heal characters as well as control war drones on the battlefield. A nice character overall.

Hulk – I look at this agent as the “tank” as he can suck up a lot of damage and deal quite a bit in return but is rather slow moving across the landscape.

Infiltrator – A pretty standard stealth sort of agent as she can move quickly without being detected. While close up the infiltrator is solid she is pretty weak with ranged attacks.

Marine – The “jack of all trades” who is pretty average in all things but highly adaptable to nearly any given situation. Plus, he has some nifty grenades to utilize.

Sniper – Excellent long range damage output but at the mercy of aliens who get close in. Thankfully, his camouflage makes him less likely to be spotted. 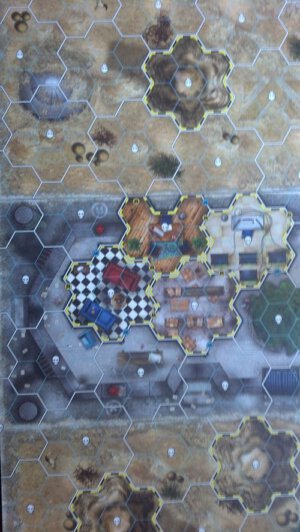 Game setup is a lot quicker than I imagined it would be, in a game such as this, and you should be ready to play within ten to fifteen minutes of deciding to take GD off the shelf. Depending on the mission you’ll be playing you’ll set up the map tiles, put together the decks (Event, Close Encounters, and Aliens) and shuffle them up, and finally set up the figures and tokens on the battlefield. The map is hex based so all movement and combat revolve around this as well as a cluster of seven hexes which are considered an Area. There are plenty of obstacles and terrain features on the map as well.

Each turn of GD is broken into Phases:

Refresh – Items and Powers which can only be used per turn are once again available if used in the previous turn.

Strategy – Players chat a bit over what their gameplan is for the turn and how they’ll look to kick alien butt. Then they determine who the Alpha Agent (first player) will be for the turn as all subsequent player actions resolve clockwise from the Alpha. Next they can roll to see if each character who iced an alien in the previous turn can receive GD-Wings. This is almost along the lines of a power-up as, if they succeed on the roll, they’ll receive a new Power to use. Along these lines, if four pieces of alien technology have been retrieved (every four aliens you kill) during the mission the Alpha can trade those in for a new equipment item. Last, the players check to see if they’ve met either the victory or defeat conditions to end the mission. 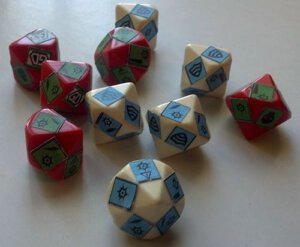 Battle – This is the real meat of the game and I won’t get into tons of detail about it but starting with the Alpha each player can Move, engage in Combat, and take an Action; these can be in any order but only performed once. Then the Aliens get a turn followed by the next player clockwise from the Alpha and so on until all the players have engaged in the Battle phase as well as a corresponding Alien turn. The Aliens are controlled by AI included on their Alien card.

There’s a lot going on during combat and players roll the custom dice to determine hits while the defender gets to roll to negate those hits. You run across energy shields, line of sight, weapons jamming, special dice results, friendly fire, smashing open doors, and so forth. In other words, this is a tactical game and the level of detail found in the combat adds to the excitement and randomness but doesn’t get overly bogged down in minutia.

As far as the Actions each of the players can use an Ability, a Skill, a tactic or a Device. Once again lots to choose from here and depending on the load out chosen to begin the game (or GD-Wing improvements as an example) you’ll no doubt have more options than you can shake a stick at in deciding what action to take. 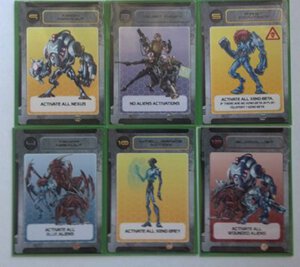 During each Alien Battle turn a Close Encounter card is drawn and the instructions on the card followed. The aliens are a varied lot from close combat mashers to wily masterminds directing the action of their subordinates from afar.  All in all an interesting mix of foes and the AI does a nice job of providing the players a challenge.

Events – An Event card is drawn and the events depicted on the card are resolved in the order presented. Some events are simply Standard which can take place in any mission while others are Special and specific to the mission being played. A third type of Event is weather as the conditions on the battlefield may change. Once nice touch to the Events cards are some of what happens is based on the number of players so this prevents the game balance suddenly shifting toward being too easy or difficult. 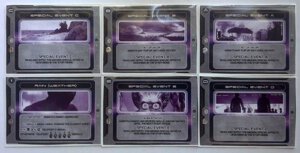 When I first opened the package Ares has sent along and I began to sift through all the various cards, tokens, maps and so forth the first thing to put into my head was, “Is this from Fantasy Flight Games?” because there’s a lot of components. Keep in mind, I received a preview so there was only a single figure and the makings for two missions included which leads me to only imagine what you’ll find in the finished product but I’ll gather we’ll be pleased!

The beta edition of the rules clocks in at over forty pages (not even including the missions) and I’ll take a stab that will stay close to the same at publication. For the most part, the rules are well put together although I think a touch of editing will go a long way toward making them easier to follow; presenting everything which has to do with a particular phase should be presented within that section of the rulebook, in my opinion, for a better flow but it isn’t as if the layout is horrible – just a touch less intuitive than I’d like to see. These aren’t the competed rules obviously enough though. 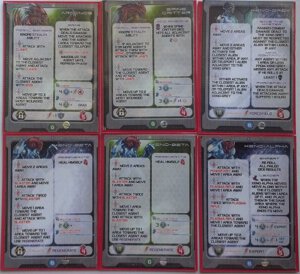 As for the gameplay? If you’re looking for some exciting seat of your pants tactical SF action Galaxy Defenders is a title you’re seriously going to want to consider jumping on board. The action heats up quickly enough and stays fast and furious once the party gets started. Each of the agents brings something unique to the table – although I have to say there’s a strong MMORPG vibe to the achetypes – and I’m sure players will soon find which they have their own favorites they’ll like to control. Luckily the agents are balanced well enough so no one is going to complain they got stuck playing XYZ again. All the different equipment and tactics also ensure a lot of variety in how you’ll play with any of the particular defenders of the Earth.

I will mention Galaxy Defenders is an epic sized game as even the starting missions took well over two hours to play with a full complement of gamers. GS might not appeal to players with exceptionally short attention spans as there’s a lot going on but for a vast majority of gamers out there, especially those who dig science fiction action, I can say their bases will be covered. While GD missions are touted as story driven I think that’s the weakest aspect of the design from my experience. That’s not saying the Event cards don’t add some additional flavor just that I found the narrative to be created more from the action unfolding on the battlefield as opposed to what was revealed through Events. 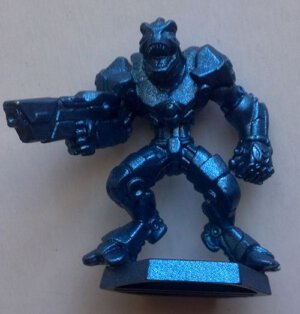 I started off by saying there’s less than a week to pledge support for Galaxy Defenders and you should know the project is well beyond its funding goal so there’s no doubt this is going to see print. If a nice meaty SF based tactical games sounds like it’s in your wheelhouse then you owe it to yourself to get onboard with the Kickstarter so you can not only score Galaxy Defenders before all the other kids on the block but also get your hands on some of the stretch goal extras out there as well. The projected release is for September this year.

Now I’ll keep my fingers crossed I get a chance to see the finished product so I can put together an actual review for the game!