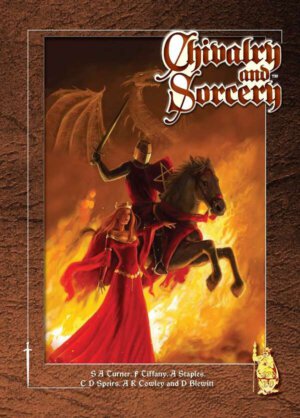 Fans of fantasy roleplaying as well as crunchy and detailed game mechanics will be pleased to know a fifth edition of Chivalry & Sorcery has arrived from Brittannia Game Designs. Originally published in the late 1970’s, the game has been an extremely popular system for those wanting a more realistic fantasy/medieval game setting. The 600 page PDF is available now from DriveThruRPG for $29.99. The hardcover book is slated for a Q1 2020 release and will carry an MSRP of $75.00.

With all the medieval flavour that was loved of earlier editions now back, this truly is the definitive edition of Chivalry and Sorcery. Players can create well-rounded characters who really feel like they belong to their world. Knights wield secular power and command the battlefield, while other warriors strive to win their spurs in combat and rise to join their ranks. Magick is deep and mysterious, drawing on real-world historical detail, while Priests utter prayers and call upon the very miracles of their gods! You decide the level of magic and fantasy for your game. Run a medieval high fantasy game filled with magic, miracles and myth, – or one of gritty, low fantasy, or even pure historical simulation. The choice is yours! From fairy-tale romance to courtly love, from religious intrigue to brutal, bloody battle, Chivalry & Sorcery lets you play in just the Middle Ages you want.

Over 30 vocations to follow
Follow Christianity, Judaism or Islam.
Over 200 Skills
Over 300 Spells and Acts of Faith

The PDF contains extensive internal hyperlinks, from chapter, content and index tabs, to every page number in the contents and index and the consolidated skills and spells lists have each entry hyperlinked.