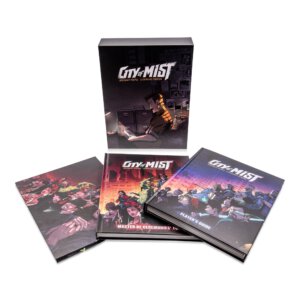 If you’re a fan of noirish superhero action, with a solid dose of the mythic, then you’ve probably already heard of the hit roleplaying game City of Mist from Son of Oak Game Studio and Modiphius Entertainment. Now available is a handsome slip case edition containing both hardcover core books plus extras. This premium edition is available in limited quantities and carries an MSRP of $114.95.

In this City, anyone could be a legend in disguise. King Arthur, Alice in Wonderland, or Tlaloc the Aztec Rain God live within regular Janes and Joes. The mythical is real, but no one can remember it. Millions of oblivious people walk these streets, thinking this City is ordinary, while the legendary skulk behind the veil of the Mist.

Hit the rainy streets of an enigmatic metropolis where modern-day incarnations of legends wield mythical powers. Investigate unsolved cases involving ancient myths living within ordinary city residents and confront the hidden forces pulling the strings from beyond the veil of the Mist. Make hard calls about whether to promote your inner legend or your everyday life, then suffer the consequences. And when it all falls apart, stop holding back and become the unstoppable avatar of your Mythos…

In addition, you receive two City District PDFs included with every set: