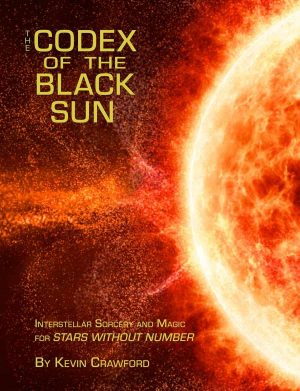 Fans of the White Box based Stars Without Number will be happy to know a new supplement will bring magic to the Sine Nomine Publishing SF RPG. The Codex of the Black Sun is jam packed with goodies to bring the arcane and eldritch arts to the cold depths of space. You can score the 152 page PDF for $9.99 at DriveThruRPG.

Unleash the power of arcanotech and the willful might of eldritch Shadows on your Stars Without Number campaign with the Codex of the Black Sun.

In this supplement for the award-winning Stars Without Number sci-fi RPG, you’ll get all the tools you need to add space magic and interstellar sorcery into your campaign. Advice on how to integrate things smoothly, tables for conjuring up social attitudes toward magic, and help with the practical concerns of adding magic to your gaming table are all provided within. Everything is presented in optional and modular fashion, allowing you to add as little or as much of it as you wish into your own personal cosmos.

Inside this book, you’ll get…

The Codex of the Black Sun is less system-neutral than most Sine Nomine publications, as it’s designed to give both GMs and players a 152-page box of new toys to play with and employ in their own Stars Without Number games. Even so, the mechanics and content within should fit well with any other game system that shares a similar classic OSR engine, as they are compatible with the early editions of TSR’s hit fantasy role-playing game.

So seize it now, bold reader! A host of possible heroes and dreadful foes await you within this book, with tools to delight both player and GM. Do not let it escape your relentless grasp!