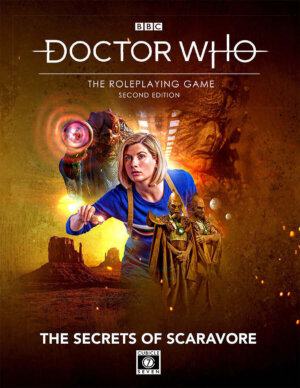 A new Doctor Who RPG adventure collection has arrived in PDF from Cubicle 7 Entertainment. Four connected tales comprise Secrets of Scaravore as your time travelers will encounter Draconians, Silurians, Zygons, and more. The 110 page PDF is available at DriveThruRPG for $19.99.

In the time before humanity, even before the rise of Gallifrey, Scaravore was imprisoned for its crimes. Last of a long dead species, it slumbered, sending its influence out into the stars. Now it seeks to rise again, to extend its evil dominion over the galaxy.

The Secrets of Scaravore is a collection of four new adventures that can be played as standalone episodes, or as a series of connected stories that lead the characters to the Wild West and distant worlds, encountering Draconians, Silurians, Zygons, and more, before finally facing the terrifying Scaravore itself.