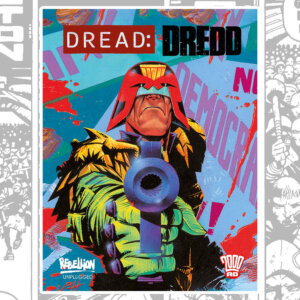 Rebellion Unplugged has released a new standalone Judge Dredd roleplaying game utilizing the Jenga-based Dread mechanics. In Dread: Dredd, one player takes the role of Mega-City One’s Host as the other players attempt to survive and flourish when pitted against the Judicial system. The 38 page PDF of Dread: Dredd is available at DriveThruRPG for $9.89.

One player takes on the role of the Host, tasked with representing the mayhem and magnificence of Mega-City One and its inhabitants. The other players act as characters living in the shadow of the Statue of Judgement, doing whatever it takes to thrive and survive.

Of course, surviving isn’t always so easy. When the players are faced with difficult or dangerous actions, they must pull wooden blocks from a tower to discover whether they succeed. If the tower comes crashing down, their character dies. The stakes are high when you take on the Judges but there is some hope in your new character abilities, reflecting the city’s wide range of inhabitants.

The PDF contains everything you need to run this standalone adventure – adapted Dread rules, pre-created character sheets, the Adventure booklet, and an Encounter list for the Host to refer to throughout the game. Just add a block tower and your gaming group and you’re good to go!

Sniper Elite: The Board Game is Arriving in Stores