Early next year, players will take on the roles of nature spirits tasked with protecting their woods in Living Forest. From Pegasus Spiele, the beautifully illustrated game looks to be perfect for those in search of a bit more complex experience than the usual family game fare. Living Forest is for two to four players, ages 10+, plays in around 30 to 60 minutes, and will carry an MSRP of $44.99 when it hits stores in early 2023.

A mystical forest, a source of rest and peace, is facing the devastating flames of Onibi. In Living Forest, players take on the roles of four spirits of nature, spring, summer, autumn, and winter to protect the forest by fending off the flames, planting trees, or awakening the forest’s guardian. Who will succeed in stopping Onibi?

In each round, players – each for themselves – turn over cards from their decks that show different guardian animals. These helpful forest creatures bring various elements with them. But be careful, among the animals are some solitary creatures that don’t mix well with others. With the elements, the players can perform one or two actions and thus plant trees, extinguish fires, move on the Circle of Spirits to activate various bonuses, attract new animals, or receive magic fragments. At the end of each round, all players must together face the remaining flames in the circle. If they cannot fend them off, they have to add Fire Varan cards to their deck – grouchy solitary animals that do not contribute any elements. The only way to get rid of them is with magic fragments! The game ends as soon as one person manages to fulfill one of the three possible victory conditions.

Living Forest is an advanced family game or a light core game with a push-your-luck mechanism and beautiful illustrations. Although all players work towards a common goal to save the forest, only one person can win in the end.

Jeff McAleer
Founder/Editor-in-chief of The Gaming Gang website and host of The Gaming Gang Dispatch and other TGG media, Jeff tackles any and all sorts of games but has a special fondness for strategy, conflict sims, and roleplaying games. Plus, he's certainly never at a loss for an opinion...
Latest posts by Jeff McAleer (see all)
Tags: Living Forest, Pegasus Spiele 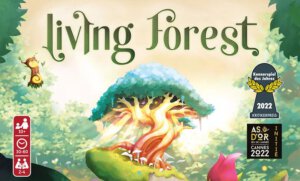 Early next year, players will take on the roles of nature spirits tasked with protecting their woods in Living Forest.
0
Awful