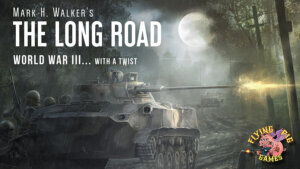 Mark H. Walker and Flying Pig Games launched a Kickstarter yesterday to bring his latest wargame to the public. The Long Road is set in a fictional 1980s where the Cold War has run hot, not because of conflicting ideologies, but because of supernatural forces. The wargame is for two players, ages 13+ (my guess), and variable play time based on the scenario. The project funded in the first twelve hours and you can reserve a copy of the game for a $90.00 pledge (unless you jump aboard today and score the early bird special of $80.00) through December 3rd. The expected delivery is August next year.

My name is Mark H. Walker and The Long Road is the game I’ve always wanted to design. An easily accessible World War III war and strategy game with a paranormal twist.

But what, you might ask, is “World War III… with a twist? In short, it’s a World War III-themed boardgame with paranormal elements.

Based on the fiction that I created in my Dark War novels: Revelation and Retribution, and expanded in the Dark War RPG and Skirmish Game, The Long Road depicts a Third World War sparked not by conflicting ideologies, but rather the back-stage maneuvering of paranormal entities with their own set of agendas. Agendas that are fleshed out in the game’s 16 scenarios.

For many of the scenarios, gamers will take the role of a Soviet or NATO regimental or brigade commander, 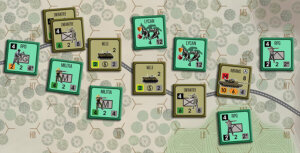 controlling platoons of 1985-era tanks, infantry, and weapons as they play through a story-driven campaign using the easy-to-learn, fun-to-play platoon commander system that I designed in 2015.

In some of these scenarios the game’s artificial intelligence will control paranormal elements that directly impact the combatants and move the story forward. For example, a strange, otherworldly electrical storm that roams the battlefield, hampering electronics and limiting engagement ranges. Or perhaps a zombie horde of unknown origin that pours from a city, attacking American and Soviet soldiers alike.

In other scenarios, you will be able to directly control strange forces as they either fight NATO/ Soviet soldiers or other paranormal entities. For instance, you might lead a Lycan clan ambushing a Soviet convoy, the unchanged clan members fighting with RPD/RPGs and assault rifles while their werewolf brethren assault with fang and claw. In another scenario vampires, with high-tech weaponry, battle Lycans to keep the Lycan from overrunning the vampire coven.

Crazy, right? But it’s done with a next-level iteration of the popular Platoon Commander system, in a way we hope pique’s wargamer’s interest. Make no mistake. The Long Road is a wargame, but a wargame with a twist.