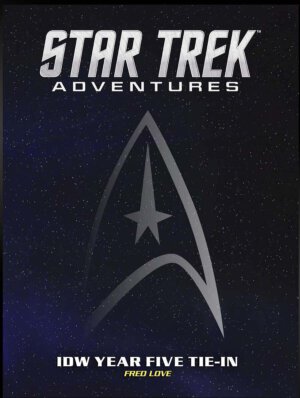 This 26-page digital supplement features content drawn from the pages of IDW’s imaginative Year Five comic book series, adapted for use with Star Trek Adventures, and ready to be added to your ongoing missions and campaigns.

You don’t need to have read the comic book series to use this new supplement in your Star Trek Adventures games. The Year Five series showcases many of the central tenets of Star Trek storytelling: diversity, exploration of the human condition, and relevant social commentary. If your game leans on any of those themes, then you should be able to find something useful in this supplement.

The series goes beyond the canon established in the Star Trek television series and films to tell the story of the final year of the U.S.S. Enterprise’s five-year mission under the command of Captain James T. Kirk. All the classic characters are in a state of transition. They know the end of an era is approaching and are making plans for what they’ll do after the conclusion of the mission. The series features imaginative new elements as well as putting new spins on some classic species and characters.