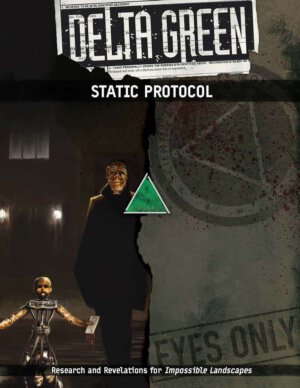 Arc Dream Publishing have released a new Delta Green supplement in print and PDF. STATIC Protocol takes the agents deeper into the struggle against the King in Yellow, as featured in the first full length DG campaign Impossible Landscapes, with more research and revelations. The 40 page STATIC Protocol is available from DriveThruRPG as a softcover (with PDF) for $19.99 or in PDF alone for $4.99.

The King in Yellow. A simple play twists thoughts and perceptions, twists reality itself. Its beautiful, poisonous words awaken realizations that make the audience long for the peace of ignorance. It first touched the stage in the dying light of the 19th century and has arisen again and again to bring to human souls the bitter satisfaction of despair.

Delta Green, a conspiracy dedicated to stopping unnatural terrors, enacted the STATIC Protocol as a ruthless response to the threat of The King in Yellow. That work comes to terrifying fruition in Impossible Landscapes, a massive campaign for Delta Green: The Role- Playing Game. Impossible Landscapes presents Agents with dreadful discoveries that spiral in upon themselves like the twists of the Yellow Sign itself.

Delta Green: STATIC Protocol enhances Impossible Landscapes by collecting even deeper research from its sprawling timeline. Agents can piece together these fragments as they pursue secrets they may regret. Secrets of otherworldly power. Of murder and memory that lengthen like the shadows cast by sinking suns. Of an invitation to a masquerade that never ends and is the end of all things. Of the bitter truths of Carcosa, The King in Yellow, and the Yellow Sign.

Achtung! Cthulhu 2D20: Operation Snowstorm is Out in PDF

Conan Adventures in an Age Undreamed Of: The Shadow of the Sorcerer Hardcover Arrives This Week