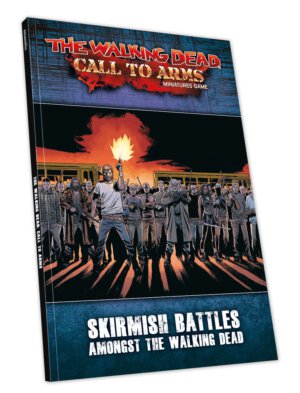 A new skirmish level miniatures game set in the comic book world of The Walking Dead is on the near horizon from Mantic Games. In The Walking Dead: Call to Arms Miniatures Game players will lead their factions against each other while aiming to avoid becoming zed chow for walker herds. There are plenty of releases hitting on August 24th and the core rulebook will carry an MSRP of $19.99.

First is the rulebook. This is the backbone of the Call to Arms releases – the awesome new rulebook by All Out War designer, Mark Latham. Inside you’ll find all the new rules, seven scenarios and lists for two starter factions (Rick’s gang and The Governor’s Woodbury). MSRP is $19.99.

Just like All Out War, characters in Call to Arms have their own stat cards. This makes it much easier to see their various stats and special abilities – rather than having to flick through a rulebook. If you’re a goody-goody survivor, then you’ll need to pick up the 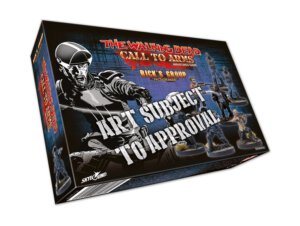 Equipment has changed compared to All Out War (to take out some of those particularly nasty combos) and that means it’s time to pick up a new equipment deck to use as a handy reference when creating your gangs. Don’t worry, all the equipment is listed in the rulebook too. MSRP is $19.99.

Fancy starting a new gang? Rick’s Group contains a selection of survivors to get your faction up and running. MSRP is $39.99. Don’t fancy playing as the good guys? The 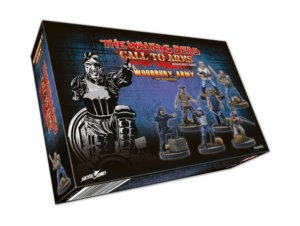 Governor’s Woodbury Army is here to crush the opposition. MSRP is $39.99 You can boost your chosen gang with the addition of the Prisoner Booster Pack. Luckily the Prisoners aren’t fussy who they work for, so they’ll make perfect allies for Rick or the Governor. MSRP is $19.99.

One of the terrifying additions to Call to Arms is the concept of the Walker Herd. Although not a threat on their own, if Walkers group together they form a formidable (and almost unstoppable) Herd. This pack includes a selection of Walkers and a 90mm x 60mm movement tray. MSRP is $39.99