Players: It’s an RPG supplement, so two or more

I sometimes chuckle when I run across something which is a stark reminder of just how long I’ve been playing table top games. Gen Con turning fifty this summer is a prime example of one of these “zoinks!” moments; I’ve been alive nearly as long as the convention has been around. Looking through Chaosium’s recently released The Grand Grimoire of Cthulhu Mythos Magic made me stop as well to consider the many years of enjoyment our wonderful hobby has given to both myself and my friends. It’s true gentle reader, I’ve been playing Call of Cthulhu since I first discovered that original boxed set of Mythos goodness on a game store shelf back in 1981.

Over the years Call of Cthulhu has undergone numerous revisions, been licensed out in a plethora of media incarnations, and seen literally hundreds of adventures published by Chaosium and other companies. Not only has the RPG ridden the ever growing wave of popularity regarding the works of the late author H.P. Lovecraft over the last few decades but also, many times, been the impetus behind that wave. CofC remains an immensely popular RPG even today; ICV2 recently revealed the 7th edition core books were the fifth best selling RPGs in game stores for Fall 2016.

The first twenty pages of The Grand Grimoire of Cthulhu Mythos Magic (just The Grimoire from here out) are devoted to discussing magic as it applies to the Lovecraftian setting. Those who may not be intimately familiar with CofC probably don’t realize player characters can’t simply run around casting spells all willy nilly, as PCs are apt to do in other RPGs, since dabbling in such eldritch arts can have devastating effect on characters’ health and sanity. I believe the following quote from the introduction of The Grimoire nicely sums up Mythos magic in a nutshell:

“Wielding otherworldly energies damns the wielder, the more one drinks of the unnatural power, the greater the infection becomes. If reading a tome can be likened to playing with fire, casting a spell is like pouring gasoline over your head and striking a match. The erosion of Sanity points combined with a thirst for magical knowledge drives people insane, destroys morality, and leaves only the insane will of the sorcerer to lust after even greater power and to plumb greater depths of horror.”

Before diving into the 550+ spells which have been converted to the 7th edition rules, The Grimoire details various aspect of magic and spells. Will the stars be right thus aiding in a successful casting? Will the caster have a proper working environment, are they in the right state of mind, or have they invested enough time and energies into preparing to work their magic? These are all factors players and the Keeper will want to take into account during a game.

To make life a tad easier on Keepers, spells are now divided into categories based upon their intended purpose. There are spells which are considered to be folk magic, others applicable only in the Dreamlands, while some bring forth monsters or gods. There are seventeen categories in all which classify what a spell may do, although The Grimoire doesn’t go the extra mile to present a category and follow with the spells which fall into each but simply all the spells in listed alphabetical order. Personally, I would have found the tome much more intuitive to navigate if the spells were laid out by category though.

The meat and potatoes of The Grimoire are, of course, the spells. Each entry shows the name (with possible alternative names as well), cost (in magic points, sanity, POW, or other requirement), time to cast, and detailed effects. Some spells also take into account what’s known as “deeper magic” whereas an insane caster or Mythos monster may tap even further into their maniacal magical knowledge and understanding of the “true nature” of the cosmos to enhance the effects of their magicks. Sadly, the adventure or scenario where a spell first appeared is not included in the entry, although I can understand the omission since a good number of Chaosium’s CofC releases over the last three decades are no longer in print; the authors may have thought it would be silly to point readers toward products which nearly impossible to track down these days.

I have to give major kudos to Mike Mason and Matthew Sanderson for all the time and energy which must have gone into producing The Grimoire. The authors haven’t just converted all these spells to the 7th edition rules but also tweaked the usefulness of many while amalgamating multiple spells, which had very similar effects, into single entries as well. Granted, The Grimoire doesn’t include every spell from every CofC publication in Chaosium’s history but the tome is pretty darn exhaustive and impressive none the less.

Readers will no doubt wonder how important it may be for Keepers to pick up The Grimoire and I think it will come down to your experience with (and investment level in) Call of Cthulhu. If your first exposure to the game came from the recently released 7th edition, and you really only plan to run published adventures, The Grimoire is great to have but I can’t say it’s an essential addition to your library since I would doubt future Chaosium adventures would force Keepers to own the book; historically any spells contained in an adventure, not detailed in the core rule book, have been fully detailed in the scenario. Not to say this couldn’t change so if the folks at Chaosium decide the make The Grimoire a core book down the road, please don’t flood my inbox with angry emails.

If you’re the sort of Keeper who devises their own adventures, or played Call of Cthulhu through previous editions, or – like myself – have made CofC their go to RPG since 1981 then The Grand Grimoire of Cthulhu Mythos Magic is surely a must have. While I have a minor quibble with the layout (I really do think presenting the spells by category would have made the book easier to use), and I’m sad the original adventures aren’t mentioned, the tome is a treasure trove of info. Not only does it put a tremendous number of spells – drawn from three decades of CofC gaming – right at your finger tips, The Grimoire contains plenty of info and inspiration for Keepers everywhere.

Jeff McAleer
Founder/Editor-in-chief of The Gaming Gang website and host of The Gaming Gang Dispatch and other TGG media, Jeff tackles any and all sorts of games but has a special fondness for strategy, conflict sims, and roleplaying games. Plus, he's certainly never at a loss for an opinion...
Latest posts by Jeff McAleer (see all)

While I have minor quibbles with the layout, the Grimoire is a near indispensable reference work for practically all Call of Cthulhu Keepers. Thirty years of Mythos magic has been converted for the latest edition of CofC and I have to give major kudos to Mike Mason and Matthew Sanderson for all the time and energy which must have gone into producing The Grimoire. 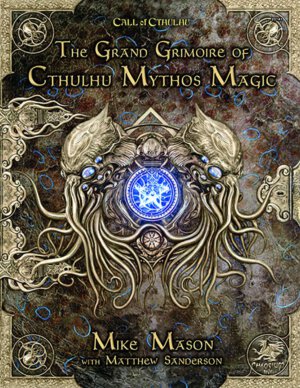 I have to give major kudos to Mike Mason and Matthew Sanderson for all the time and energy which must have gone into producing The Grimoire.
0
Awful

Jeff McAleerThere really isn't a whole lot of art throughout but what there is is fine. The graphic layout is much in the same style as the recent the 7th edition CofC releases. Outside of my impression the spells could have been categorized more effectively, the product is top notch IMO....

Ronnie SanfordThanks for the great review Jeff! How did you find the books layout, font, art and quality of construction?...