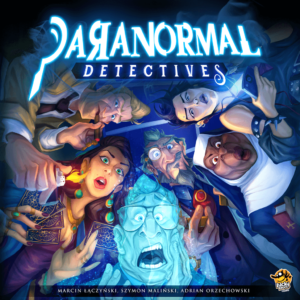 Lucky Duck Games will be unveiling a spooky deductive party game just in time for Halloween. In Paranormal Detectives, one player represents the ghost of a murder victim while the other players take on the roles of sleuths trying to learn the identity of the killer and details of the gruesome deed. The game is for two to six players, ages 12+, plays in around 45 minutes, and will carry an MSRP of $39.99 when it arrives on October 24th.

You are a ghost, floating in the air looking at your own body. Avenge your death by trying to communicate what happened to you to the paranormal detectives who have a vision of your body! Do so by arranging a hangman’s knot, pointing at letters on a talking board, drawing images by holding the hand of a detective, or many other forms of interactions.

Paranormal Detectives is a competitive deduction party game in which one player takes on the role of a ghost and all other players try to be the first to figure out who the killer is—in addition to how, where, and why they died.

• Each detective receives an asymmetrical and pre-constructed set of interaction cards.
• Detectives can ask any open questions, but they are limited to their interaction cards to receive answers.
• Constrained interaction implies tons of creativity for both the ghost and detectives to share information among each other!

The game can end in 2 ways:
– if a Detective gives all correct answers. In this case, they win, together with the Ghost player.
– if all Detectives run out of interaction cards. In this case, If no one has guessed everything correctly then, whoever guessed correctly the most information is the sole winner of the game!