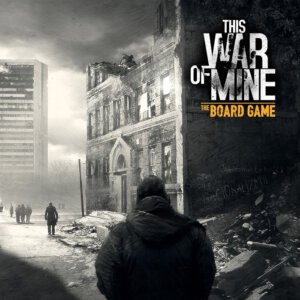 Galakta Games has five new releases (distributed in the U.S. by Ares Games) arriving at Gen Con this year and the title creating the most buzz is This War of Mine: The Board Game. Based on the acclaimed 11 bit studios video game, This War of Mine promises to bring challenging decisions and tough moral choices to the table top as players look to keep their group alive long enough to see a cease fire in the conflict. The game is for one to six players, ages 18+, and will carry an MSRP of $69.90.

This War of Mine – the Board Game – Cooperative game about surviving in a war-ravaged city, based on the gripping survival video game by 11bit aot-boxstudios. Players are part of a group of civilians trapped in a besieged and conflict-ridden city, enduring many hardships that test the essence of humanity. To survive, they need to make tough ethical choices, which have consequences that last the rest of the game. This War of Mine was adapted to tabletop by the game designers Michał Oracz and Jakub Wiśniewski, and funded with a campaign on Kickstarter that raised £621,811 in pledges, supported by 9,627 backers. This War of Mine: The Board Game is a game for 1 to 6 players, 18y and up. Published by Galakta Games, its English edition will be distributed by Ares Games worldwide, excluding Europe, from August 2017. The “TV Set” Promo Mini-Expansion will be available with purchases at Gen Con.

Age of Thieves – Master thieves are challenged to commit the most daring burglary of their careers: enter the vault inside the palace and steal the Emperor’s Jewel, the symbol of power of the ruling house. Age of Thieves is a clockpunk board game of strategy and adventure set in a port metropolis of Hadria. Each player becomes a master thief about to commit the most daring burglary of his career. During the game, players use unique abilities and action cards, which feature acrobatic maneuvers, alchemical potions or complicated devices inspired by the visionary ideas of Renaissance inventors. It’s a game for 2 to 4 players, aged 14+. The promo pack “Chaos in Hadria” with Age of Thieves will be available with purchases at Gen Con. 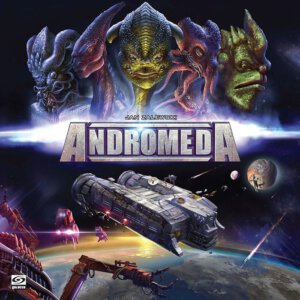 Andromeda – A strategic board game for 2-4 players. In the far future, the humanity is long extinct, and its place has been taken by many new races from across and beyond the galaxy. When a mysterious, abandoned spaceship, containing ancient technology is detected, a group of representatives of different races will explore it, and the chase for knowledge begins. Each player becomes a leader of one race. Players collectively explore the spaceship thus trying to secure long-forgotten technology that might help their races in dominating the universe. Additionally, each player tries to fulfill missions given by his superiors as they bring him ever closer to victory. Andromeda is a game for 2 to 4 players, aged 14+.

Ragers: Champion of the Arena is a fun, quick and aggressive card game card game of wits and bluff. Each player becomes a head of a team of Ragers – powerful fighters who settle disputes between tribes during the Great Thing that lasts for three days. Each day of the Great Thing is devoted to a different deity, and each day bloodthirsty spectators expect daring feats of strength and cunning, so the conditions of combat change constantly. During the round of Ragers: Champions of the Arena, players play cards depicting brave warriors and representing different types of attacks and special actions. It is up to the players to choose the best strategy that will appease the crowd and enable them to outsmart their rival. Ragers is a game for 2 players, aged 14+.

Zombie Terror is game of survival in the zombie-infested world. Only a few have managed to stay alive after the zombie apocalypse. A small group of survivors hide inside a shopping mall, but the apparently safe place soon turned out to be a dead end – literally! In the face of danger, they have only one choice – to escape! However, the only way leads through a parking lot full of brain-thirsty zombies. Zombie Terror is an asymmetrical game for two players. One player becomes the leader of the surviving humans who must be smart and ready for any sacrifice if they hope to survive in the world full of deadly surprises. The other controls the ravenous zombie horde with only one goal – to feast on the human corpses. Zombie Terror is a game for 2 players, aged 14+.