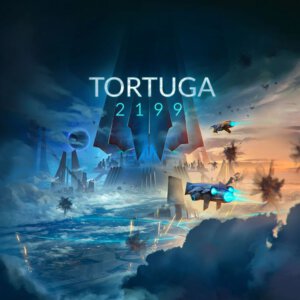 Shiver your timbers as Grey Fox Games is promising pirate-y science fiction goodness with the Tortuga 2199 Kickstarter project. The game features elements of deck-building and area control as up to four players sail the space lanes with each looking to be crowned the greatest captain. Tortuga 2199 is for two to four players, ages 12+, and plays in around 60-90 minutes. The project is past the 185% funding level and you can reserve a copy of the game, plus a free fifth player expansion as well as unlocked stretch goals, for a $59.00 pledge through February 13. Expected delivery is this August. 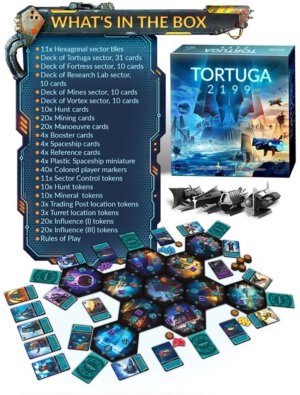 The planet is located inside the neutral buffer zone of Omega sector.
Since the miners’ rebellion, the planet is under control of insurgents and pirate clans.
Visiting is highly discouraged by Confederation ships.

Tortuga 2199 is a deck building, exploration, and area control game for 2–4 players.

Play as the pirate captain of a space ship.
Your objective is to become the most powerful captain and have all of the disunited pirate clans join your cause.
Upgrade your ship and hire new crew members.
Explore and conquer different sectors of the planet.
Fight space beasts and board other captains’ ships.
All of the above increases your influence and helps to reach your goal.

Good luck, captain. All sails to the space wind!