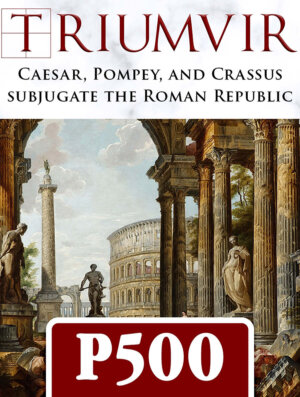 A new game from Mark Herman and Geoff Engelstein is up for reorder from GMT Games. In Triumvir, players will take the roles of Caesar, Pompey, and Crassus as each looks to become the most powerful leader in Rome. The game is for one to three players, ages 14+, and can be preordered for $60.00 with an expected MSRP of $92.00.

It’s 60 BC, and the three most powerful men in Rome form a loose alliance based on marriage, self-interest, and a thirst for power. In Triumvir, you take the role of one of these Roman power brokers as you vie for power and position that inevitably leads to Civil War.

Triumvir builds on Versailles 1919 where players use influence to gain control over issues and the path that history will take going forward. In Triumvir, you will use your three-dimensional influence in popularity, money, and legions to vie for the Consulship, Pontifex Maximus, and Governorships as you try to outmaneuver your erstwhile friends on the floor of the Senate. The game can be played with 1 – 3 players.

During your turn, you will perform one of three actions: Place influence (popularity, money, or legions) on issues that are being debated in the Senate, Recover exhausted influence, or Settle an issue. These actions are punctuated by elections, revolts in the provinces, and domestic unrest. As one of the Triumvirs, you will have to balance your tempo of activities to ensure that you are not caught short on your ability to influence how events evolve and progress.

Although Triumvir uses many of the basic mechanics from Versailles 1919, the design is thematically aligned to its subject. When an issue settles, your choices will alter your popularity and resources where the Consul often gets his cut. Each player has a unique personality card that asymmetrically captures your personality’s strengths in how they gain and recover influence. These characteristics are enhanced by your growing tableau of patrons—some of whom bring additional resources.

Revolts are intense events where the Governor of the affected province has to re-establish Roman rule. Failure to do so carries tough popularity penalties whereas success raises your stature. If you put down a particularly epic revolt in a grand fashion you can be awarded a Triumph with extra legions, but remember—sic transit gloria. The tides of fate can often turn against you in the next election or foreign war.

This political danse macabre continues until the ‘Crossing the Rubicon’ issue ends the Roman Republic and brings on a Civil War or one player dominates faction standing. Can you prevail against your political rivals as you try to dominate Rome? Your seat at the table awaits you in Triumvir.