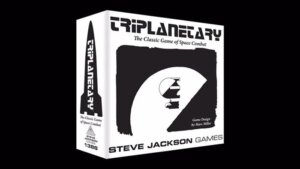 Steve Jackson Games launched the return of a real board game classic through Kickstarter today. In 1973, Marc Miller (of Traveller fame) released a unique science fiction title on the masses and Triplanetary quickly gained a solid cult following. Having been out of print since 1981, the venerable GDW game of space combat is aiming to make a comeback with some new editing by Steve Jackson himself. Triplanetary has already hit its funding goal in the first day and you can reserve a copy of the game for a $45.00 pledge (a little steep in my book) through February 9th.

From the dawn of the hobby, a classic space game returns…

“Keep our guns on Able. Any sign of the freighter they took?”

“Negative, captain . . . Bravo is changing course . . . She dropped ordnance. Looks like a mine.”

“Prepare evasive action. Are we having any effect on Able?”

“We see debris, captain, but Able is still firing on us.”

A tremor ran through the ship. “Captain, the drive is damaged. We won’t be evading whatever it was Bravo dropped.”

“Keep the guns on Able. All hands to collision stations.”

Triplanetary depicts ship-to-ship space combat in the Solar System using a vector movement system. It was designed by Marc “Traveller” Miller and first released in 1973. A second edition was released in 1981, but it’s been out of print since then.

Now, this long-lost game returns with a larger map and 5/8” counters! The new edition contains an alternative combat system for those who like more detailed space warfare, but the original rules are included and play just as well as they did in 1973.

Triplanetary is fun to play solo, and has scenarios for two, three, and four+ players. The quick, intuitive movement and combat rules are unchanged. All the scenarios from both editions have been collected, and new campaign rules added. This edition is lightly edited by Steve Jackson, who has been a Triplanetary fan since his college days.