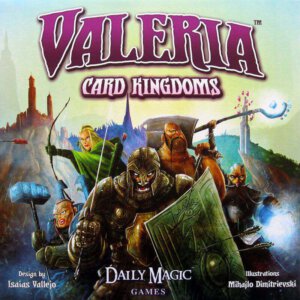 Following a successful Kickstarter, the new edition of Valeria Card Kingdoms is on the horizon from Daily Magic Games. In the game players players battle monsters and control lands in order to be named the king of Valeria. The game is for one to five players, ages 13+, plays in around 30 to 45 minutes, and will carry an MSRP of $35.00 when it arrives in early 2022.

The land of Valeria is under siege by hordes of monsters. You and your fellow Dukes must recruit citizens and buy domains to build up your kingdoms and slay the foul creatures that lurk in the surrounding lands.

Valeria: Card Kingdoms is a tableau-building game for 1-5 players and will feel familiar to deck-building fans. The cards you buy can work for you on your turn and on all the other player turns, as well. On your turn, roll two dice and activate citizen cards with the result of each individual die and the sum of both dice. All players harvest resources at the same time. After you take your two actions, pass the dice. The player with the most victory points at the end, wins the game.

Make a Name for Yourself!

The aim of Valeria: Card Kingdoms is to become the next king of Valeria by having the most Victory Points at the game’s end. Points are gained by slaying monsters and buying domains. Additionally, your secret duke is revealed at the end of the game to accumulate more point according to your goal. The game ends immediately after all monsters are killed, or all domains are purchased, or when 2 (two) times the amount of players worth of stacks are taken from the center play area.

Valeria: Card Kingdoms Second Edition | Review and How to Play

Jeff’s Favorite Board Games of 2021