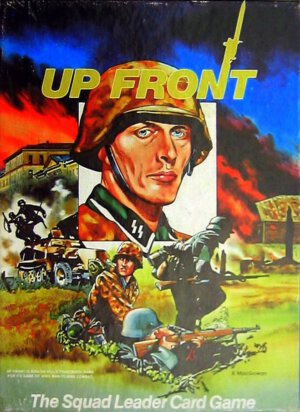 Canadian game company Valley Games has announced they will be reprinting the Avalon Hill classic card game take on Squad Leader, Up Front. Details are sketchy at best with the only indication of the company’s plans for the title showing up as a post on BoardGameGeek.

Valley Games is very excited to announce that we have been offered the opportunity to produce Up Front. In association with the original designer, Courtney Allen, we will reproduce this classic title with improved and enhanced rules, new artwork and new graphic design. We will use Kickstarter to fund the project with a planned launch date of December 2012. More information to come as we get closer to the launch date.

I’d hate to rain on anyone’s parade but this isn’t the first attempt to reprint the 1983 Avalon Hill classic and previous attempts have died on the vine. Regardless of original designer Allen’s involvement, unless Hasbro has agreed to a licensing deal or straight out sale of the rights to Up Front we won’t be seeing the game. Multi-Man Publishing (known for their massive Advanced Squad Leader library) previously had a deal in place with Hasbro but let that expire without the game being reprinted. It could be possible, as the announcement doesn’t indicate a straight reprint (outside the posting title) but a game with “improved and enhanced rules,”  a re-imagining ala FFG and Dune *ahem* Rex is in the works as Mr. Allen certainly doesn’t own the rights to Up Front. I also find it strange Valley Games has only posted on BGG and the announcement isn’t even on their own website.

Add in the fact previous Valley releases Titan, Hannibal, and Republic of Rome had production and rules issues and that doesn’t bode well for a much more complicated undertaking. I’d have a lot more faith in the project if a company with a track record of say a GMT was handling the reprint but only time will tell.

Don’t get me wrong because I’d love to see the venerable title reappear on the market as it still has a very loyal following. Yet, unless Hasbro is on board, wargamers won’t be seeing what they know as Up Front anytime in the foreseeable future regardless if the original designer is involved or not.