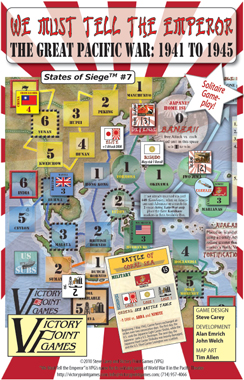 Here’s the scoop on both games from VPG:

We Must Tell the Emperor brings Victory Point Games’ unique States of Siege™ game series (first introduced in Darin Leviloff’s groundbreaking Isreali Independence design) to the grand scope of the Pacific Theater during WWII. As the military and political leader of Japan, you must drive the enemy “Fronts” far away from the Home Islands while also securing enough precious resources to maintain your Empire. If the war cannot be brought to a successful conclusion early on, then the burgeoning Allied strength will unleash a hailstorm of steel upon the player that will require the utmost test of skill, nerve, and luck in order to survive.

As the various Event cards are revealed, you must deal with enemy offensives and constant resource crises. A new addition to the series is the inclusion of a Battle Table where the player has the option to try and change the course of history at locations such as the Coral Sea, Midway, Santa Cruz, and Iwo Jima!

The Guadalcanal Campaign is probable – but not assured – and China will play a pivotal role in the conduct of the war. Will you have sufficient Oil to fuel your Army-Navy while propaganda boosts your government’s Prestige? Launch Kamikazes, endure marauding Allied submarines, and hope that your Island fortifications can stem the Allied tide. Will you be able to subdue the enemy or hold on till the war’s brutal end? Play We Must Tell the Emperor and find out!

With the sailing of Fleets 2025: East China Sea, Victory Point Games launches you on a Chris Taylor designed blue water adventure of high-stakes ‘political poker’ centered on daring air and naval engagements between the modern fleets of the United States and China as the Taiwanese flashpoint of the East China Sea ignites into a crisis on the brink of spinning out of control. Here, player nerve and skill are required to hunt the opposing forces and inflict sufficient military damage to break their political will and get them to “blink first” and back down!

In this low-to-moderate complexity wargame, the great concerns of modern naval warfare are handled with fine design elegance to highlight the asymmetrical forces, systems and tactics used by both sides through the lethality of modern weaponry. With deep strategic puzzles and wild military and political action simulated by the simple use of fast-action card play and lots of dice, Fleets 2025: East China Sea is a nautical thrill-ride through tomorrow’s headlines for budding Admirals.

Travel on over to Victory Point Games so you can cash in on both games for the low price of  $39.95 (as opposed to the retail price of $53.90) while supplies last or before the gang at VPG come to their senses!