Our friends over at Victory Point Games are always looking for gamers who will help them playtest titles in the pipeline. This is a great way to make an impact on games on the horizon but you do have to take the (unpaid) job seriously. There are currently four games VPG would like to get in front of playtesters. 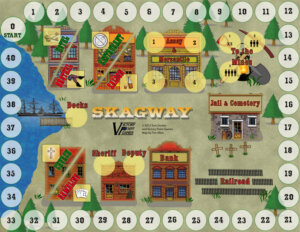 When gold was discovered near the Yukon River in a remote area of Canada in 1896, nobody could predict the massive gold rush that would follow and the effects it would have around the world. From small huts along the rivers, towns sprang up and some became large cities while others disappeared completely. The small town of Skagway became the launching port for expeditions into the Klondike area over the White Pass. But as the miners squandered away their newfound wealth, it was often the clever business men and women who profited the most.

In this 2 to 4-player game from designer Tom Decker, you play one of these entrepreneurs in Skagway, employing two workers to help you reach your goals of fame and fortune. Through purchasing key buildings in town, heading out to the mines, building a railroad into town, and possibly hiring extra hands to help you out, you can start to build your Alaskan Empire. Players are also given the choice to fight for good as the town sheriff, or become a legendary gunfighter or bank robber. But whatever path you choose, in the end, the player who has amassed the most wealth before the gold all dries up wins at the end of the day. 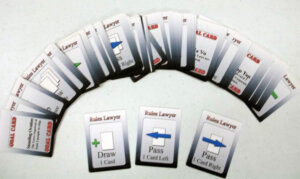 Rules Lawyer, by designer Nathan Hansen is a multiplayer card game (at least 3) with shifting rules. Each player takes turns adjusting and then obeying the 3 Laws of the game; each law is made up of several Rules Cards. There are also a number of Goal Cards in the deck. The players are trying to make the Laws match their Goal Cards in their hand. If they can do so they get to claim the goal. The first player to have 3 Goal Cards wins (you can even win on another players turn!). 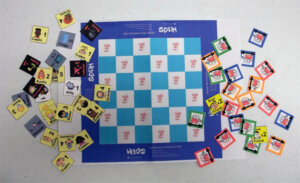 HUGS, by designer John Poniske, is a 2-4 player game in which you are a member of a big family and you love everyone… so you give lots of hugs and earn points by doing so. Of course, some people need more hugs than others, and then there are some people and some things you want to avoid hugging.. but can you tell the difference? See how many points you can earn

This quick 15-minute game for both parents and kids is enjoyable and in need of playtesters! Grab your friends and family and sign up today! 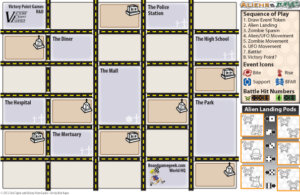 Aliens vs. Zombies, by designer Chris Taylor, is a two-player game about the life and death (mostly death) battle between two natural enemies: Aliens and Zombies. The Aliens attacked the Earth and destroyed 99% of humanity. However, the Alien Death Ray interacted strangely with human DNA! Within 24 hours of death, the human corpses rose from death and slowly shambled in the general direction of the Alien attackers to take their revenge.

If you are interested in becoming a Victory Point Games playtester for any of these games, you need to read this article and follow its directions about contacting us. Thanks for your consideration!