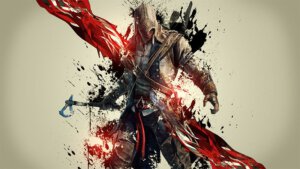 Assassin’s Creed: Syndicate is due out this October, and judging by the trailer, we’re in for another incredibly beautiful, action-packed edition of the successful series. This time around, players will explore the dark, smokey cityscape of industrial revolution-era London, which should bring about a fun mix of primitive and modern technology (you know, where weapons, transportation, and the like are concerned).

That said, there’s at least a minor degree of disappointment that comes with the choice of this particular setting. This is a series that has become famous for exploring various chapters of history in exceptional detail. And yet, as of late, it seems to have gotten stuck on the Western world, and its only pre-1700s journey in the last several editions came in the form of Assassin’s Creed: Black Flag, which was terrific but felt like a spinoff.

I, for one, am ready to see the folks at Ubisoft branch out with something a little more daring—perhaps an older time period or a more obscure culture. I have no doubt Syndicate will be another great game, but while we’re waiting for it, here are five settings I kind of wish we were getting ready to play instead!

Feudal Japan is one of the more popular suggestions out there for an Assassin’s Creed game setting, despite the fact that it’s more or less been shut down already. In an interview with creative director Alex Hutchinson, it was revealed by IGN that Feudal Japan has been nixed because he said it would be “boring.”

Um, okay. Casually dismiss entire chapters of history much, Mr. Hutchinson? In fairness, he went on to explain that what he meant was that this era and location in history has been “well-mined in video games,” meaning an Assassin’s Creed foray into the area would feel a little too familiar. He’s got a point, given series like Ninja Gaiden, Tenchu, and others. Still, though… the unique architecture, swordplay, and ninja stealth associated with the setting are made for Assassin’s Creed.

While Alex Hutchinson dismissed the idea of Feudal Japan as a game setting, he did also propose one of the most interesting ideas I’ve heard: the British Raj (or, essentially, British-occupied India during the 19th-20th century turn). This is a fascinating historical period that took place in an exotic location that Ubisoft could work wonders with. Additionally, the hybrid architecture created by Indian citizens under British direction, known as Indo-Saracenic, produced some stunning structures perfect for climbing around and sneaking through.

There are shockingly few high-profile video games to have taken advantage of the natural intrigue of Ancient Egypt. A lot of modern shooters actually involve present-day Egypt, and some older strategy and conquest games used the setting. But in our current gaming landscape, the best examples of ancient Egypt tend to be in niche genres. A prime example is Intercasino’s range of slot machine games, which includes a number of historical settings with options like “Ramesses Riches” and “Cleo Queen Of Egypt.” These showcase some of the most prominent placement of one of history’s most fascinating chapters in modern gaming.

So why wouldn’t the folks behind Assassin’s Creed give the setting a boost? Slot machine and strategy games can make use of Ancient Egypt in their own ways, but no one has really explored the area in gaming the way an Assassin’s Creed title would. The area may be somewhat sparse compared to other AC titles, and pyramids and monuments would make for less intricate climbing maneuvers. However, a fresh and different take is exactly what the series needs.

This is an idea I’m borrowing from Forbes, which mentioned it as part of a list of suggested settings that might have been more interesting than industrial revolution London for Assassin’s Creed: Syndicate. And it really is a great idea for a new game.

The Boxer Rebellion was an uprising of native Chinese against the spread of Western culture in the region. The bulk of it took place around 1900 in northern China, and best of all for an Assassin’s Creed game, the conflict highlighted every sort of combat from martial arts to firearms. In fact, the very name “boxer” came to describe the rebellion because it’s how Westerners described the rebels, who often relied on hand-to-hand combat. It’s not exactly difficult to see the Templars and Assassins getting mixed up in this one!

There’s already an entire Reddit thread about this idea, so I can’t quite claim it as my own. Furthermore, it’s been done to some extent in the events of the original Assassin’s Creed game, which took on the Crusades. However, a game more centralized in England that took advantage of the culture of castles and kingdoms would be something new and exciting.

But there are two problems with this idea: one is that most castles are miles and miles away from one another, making free-running difficult. Another is that medieval England has been highly fictionalized and romanticized, and a more realistic take like the one the Assassin’s Creed creators would likely go for might be a letdown. Still, if there’s a way to do it, the very idea of knightly combat and castle scaling could carry the game.