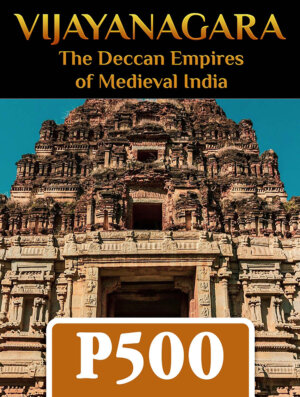 GMT Games has revealed a new Irregular Conflict Series title – designed by Saverio Spagnolie, Mathieu Johnson, Cory Graham, and Aman Matthews – has hit the P500 preorder list. Vijayanagara: The Deccan Empires of Medieval India will task each player with leading their faction to dominance over the Indian region. The game is for one to three players, ages 14+, plays in around 90 minutes, and can be preordered for $54.00 with an eventual MSRP of $79.00.

Gathering at the monastery of Sringeri in Karnataka, the Sangama brothers have anticipated the ebb of Delhi’s authority in the Deccan and the crumbling of the Hoysala kingdom. From these ashes will rise Vijayanagara, “City of Victory,” which will ascend to take its place among the great empires of the medieval world. Meanwhile, the Bahmani Amirs have established their own kingdom, one which will rival Vijayanagara in strength and culture for decades to come. And in the mountains to the northwest, Mongol hordes are gathering, their eyes fixed upon Delhi from above.

Vijayanagara: The Deccan Empires of Medieval India, 1290-1398 depicts the epic, century-long rise and fall of medieval kingdoms in India over two dynastic periods, for 1-3 players.

Vijayanagara is the first game in the new Irregular Conflict Series. with gameplay inspired by GMT’s COIN system, 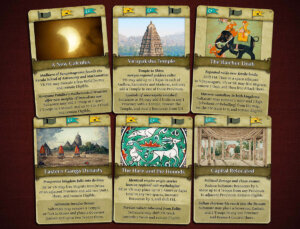 players will take on the asymmetric roles of the Delhi Sultanate, the Bahmani Kingdom, and the Vijayanagara Empire, navigating event cards and unique action menus as they contest to write themselves into medieval Indian history. Players will rally local amirs and rajas to their cause, construct epic temples, forts, and qasbahs, and battle for supremacy over the Deccan plateau.

Vijayanagara is intended for players new to asymmetric wargames and veteran COIN players alike. The factions have distinct capabilities and each is faced with different strategic decisions, offering a very high degree of replayability. The game is streamlined: all player actions and most rules are visible on the table on player aids and cards.

Gameplay and turn order is organized around a deck of unique event cards. With each new card, factions have the option to carry out the event or to select from faction-specific Commands and special Decrees; Commands such as the Conscription of new troops, Governing in Tributary Provinces, and Migration to begin life anew, and Decrees ranging from Demanding Tribute, Conspiring with Delhi’s Governors to betray the Sultan, and forming new Alliances with minor regional powers.