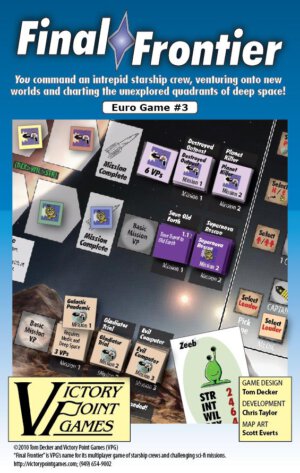 Victory Point Games has announced their second bundle sale and it includes Final Frontier and PARSEC. Self proclaimed as The Little Game Company That Could, VPG releases a wide range of games that appeal to all types of gamers. This time around the focus is on SF action in the Dual Star Pack!

Our second sale bundle has been put together, the Dual Star Pack, featuring our multi-player science-fiction double-feature: Final Frontier and PARSEC. These games are more fun than a barrel of tribbles and just right for the family and friends around the holiday season. They’re sold together at an attractive, discounted price that should entice any cosmic fence-sitters to come down on the side of playing and/or gifting these truly fun games.

Depending how this special offer goes, there will be others – but we’re not far enough along yet to know what those might be. We’re happy to report that you, the steadfast and loyal gamer who follow this column each fortnight, have been offering suggestions, and we are listening! For now, you should know that you have VPG’s new Jill-of-all-Trades, Noelle, to thank for making these sales possible, as she is the one converting our crazy marketing ideas into practical art and web pages for your shopping convenience. Currently, we are thinking that we might launch a new sale every three weeks, having it replace the previous sale, and are planning to investigate more esoteric bundling of our gaming products in the future.

Boldly go where no one has gone before in Final Frontier, where you command a vaunted starship crew of humans, aliens and robots, venturing onto new worlds and charting the unexplored quadrants of deep space to face fantastic challenges in the best storytelling traditions of episodic space operas.

While engaging in heroics and daring-do,  relationships can form between your crew-members even as they win fame and experience, so only the best leader managing all of the skills and personalities aboard will triumph at the Final Frontier!

Number of Players: 2, 3 or 4
Ages: 10 and up
Playing Time: approximately 20 minutes per player
Complexity: 4 on a 9 scale
Solitaire Suitability: 3 on a 9 scale
Scale: Each crew card represents individual human, alien or robotic starship officer; each turn represents one mission/episode 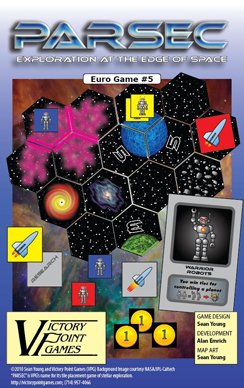 When your Homeworld is nearing its demise, it it time to saddle up your rocket ship and explore the neighborhood in nearby space. Parsec is a tile placement game of discovery and exploration in outer space for 2 to 4 players.

Featuring easy mechanics and a nimble pace, PARSEC is a truly teachable game for everyone. It boasts rich, compelling Euro-style competitive gameplay as each player races to improve their positions to garner the most points and technology progress between scoring rounds. Careful placement of drawn tiles featuring sections of planets, nebulae, asteroid fields, and more is half the game, while maneuvering your rocket and carefully assigning its compliment of robots for control of these key locations is equally important.

This is your chance to save the denizens of Homeworld; explore PARSEC today!

Number of Players: 2, 3 or 4
Ages: 10 and up
Playing Time: approximately 90 minutes
Complexity: 2 on a 9 scale
Solitaire Suitability: 3 on a 9 scale
Scale: Each player commands a ship full of robots exploring the space around their declining homeworld