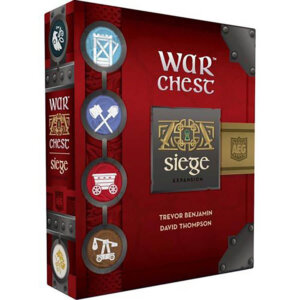 Next month will see the release of a new expansion for War Chest from AEG. Siege, designed by Trevor Benjamin and David Thompson, features new engines weapons of war as well as new defenses in order to try and thwart them. The expansion is for two or four players, ages 14+, plays in around 30 to 60 minutes, and will carry an MSRP of $19.99 when it arrives next month. You’ll need a copy of the base game to enjoy Siege.

You can check out my review of War Chest right here!

Not all battles are fought on the open field. In many cases defenders hide behind the thick walls of mighty castles. Now is the time to prepare for Siege! As castles grew larger and stronger throughout the middle ages, new ways evolved to scale, knock down, and even undermine their walls.

In War Chest: Siege, you will be confronted with fortified locations. Fear not, you have siege towers and trebuchets at your disposal and hardy sappers to both build your own fortifications and undermine your opponents’. Can you successfully return to the battlefield with your war engines in this ingenious and engaging game of tactics and strategy?