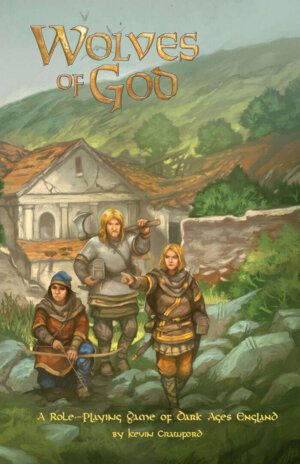 Wolves of God: Adventures in Dark Ages England is the latest Sine Nomine Publishing roleplaying game from acclaimed designer Kevin Crawford (Stars Without Number, Godbound, Silent Legions) and you can now score a copy. In the game, your adventurers will explore a pseudo historical England of the 8th century. There will also be magics and monsters to deal with in the post-Roman era Britain. The 338 page corebook is available at DriveThruRPG in PDF for $19.99 or in standard POD hardcover (including the PDF) for $59.99.

It is 710 AD. It is an age of iron and ruin, a wolf-season amid the ashes of Roman Britain. The spears of the English tribes are raised against their rivals, and the Wealh of the western hills remember bitterly what was taken from them. The shattered caesters of past Roman glory litter the land, each one laden with forgotten troves hidden by desperate men of the last days. Sorcerous Arxes once sealed against a Roman rescue that never came are now cracking open, the changed refugees within now seeking vengeance for a ruin of centuries past. The holy minsters of pious monks and godly nuns stand as bulwarks against cruel and merciless bloodshed, but can their labors ever hope to tame the beasts within their kinsmen’s hearts?

Wolves of God is an old-school-inspired historical fantasy game from the maker of Stars Without Number and Godbound. Set in 710 AD, PCs take up the roles of daring English adventurers: brave Warriors, holy Saints, and sorcerous Galdormen all setting forth to brave the savage wilds of post-Roman Britain. Whether plundering ruined caesters, delving into the bewitched halls of ancient Roman Arxes, raiding the cattle of rival lords, or helping holy abbots in need of strong arms, the heroes will plunge deep into the savage past of this half-conquered island.

Within these pages, you’ll get…

So take up your spears and lift your shields, bold adventurers! Deeds of mighty heroism and the songs of the scops await your labors. Seize Wolves of God now and take your place among the mighty names of old.