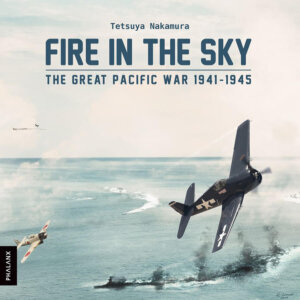 Phalanx Games is aiming to reprint the classic Multi-Man Publishing WWII wargame Fire in the Sky. The strategic level game, designed by Tetsuya Nakamura, features the action in the Pacific theater as the players look to dominate the region. Fire in the Sky is for two players, ages 12+, plays in around five hours, and will arrive later this year.

Simulating the Pacific Front of World War II has always been one of the great wargame design challenges. The same distance that planes could cover in a few hours took days for ships and weeks for foot soldiers. Hostile jungles and great oceans combined to make logistics and transport of paramount historical concerns. These and other design puzzles are solvable by only the most gifted designers.

With only one map and 180 counters, Fire in the Sky packs years of prior Pacific design attempts and experience into an effort that beautifully distills the essence of the conflict and serves as further proof that great things do indeed come in small packages. Fire in the Sky provides players with the same problems and perspectives faced by the historical combatants, yet does so in a game that can be played in 5 hours or less. The game is ingeniously balanced and so provides not only a look into the minds of the actual commanders, but also a fun, competitive and tense gaming experience.

The game includes glorious 1-inch counters, a clever map that integrates hexes and areas, and rules that cover all of the essential aspects of the Great Pacific War. Oil convoys and troop transports are as vital to victory as the massive Carrier fleets that steam over the vast Pacific. Tetsuya Nakamura’s intelligent and ingenious design also offers Western players a fascinating glimpse into the Japanese perspective on the war.