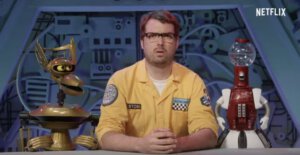 Star Jonah Ray earlier today tweeted that Netflix has pulled the plug on the reboot of the cult movie riffing show Mystery Science Theater 3000 after two seasons. The new incarnation seemed to be rather hit or miss for many long time fans of the original show. This comes just as Shout Factory prepares for the annual MST3K Turkey Day online marathon which begins at 12pm EST Thanksgiving Day.

@JonahRay – So, Netflix decided to not do another season of MST3K. We are off to Get Down in Lilyhammer while the OA helps us take it One Day At A Time. We will be in group therapy with Tuca & Bertie, Jessica Jones, & Lady Dynamite. The sessions will be run by Gypsy (w/ Naomi Watts.)