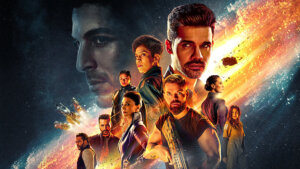 The eagerly anticipated fifth season of The Expanse has premiered on Amazon Prime today. The crew of the Rocinante return as they and their allies ready themselves to deal with a new balance of power in the wake of devastating attacks on Earth and Mars. The first three of ten season five episodes are available to stream right now as the remaining will air weekly. Amazon has already revealed season six will be the final on Prime but there are still more books to adapt so it’s very possible the series will land somewhere else.

In different parts of the Solar System, the crew of the Rocinante and their allies confront the sins of their past, while Marco Inaros unleashes an attack that will alter the future of Earth, Mars, the Belt, and the worlds beyond the Ring.

The future of The Belt has begun as Marco Inaros wages Armageddon against the Inners for a lifetime of oppression and injustice.