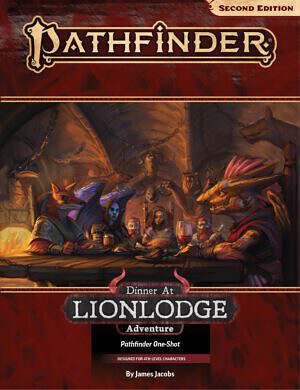 Designed to be set up and run quickly, Dinner at Lionlodge provides GMs and players with four pre-generated characters each created from the Lost Omens Ancestry Guide. While players can choose to create their own characters, the hints at two what nefarious trap awaits are specific to the four characters included with the scenario. Likewise, should GMs choose to slip Lionlodge into an ongoing campaign, they should be prepared to create new hints tailored to their specific player characters’ backgrounds.

The adventure unfolds much as expected. Characters find themselves invited to the mysterious Lionlodge under the guise of hearing about a new offer of employment — and with the promise of additional payment regardless of their acceptance. As they enter, however, it quickly becomes clear that something is terribly amiss.

While there are opportunities for some exploration and some roleplaying —particularly at the dinner itself— Dinner at Lionlodge is a combat-driven adventure, putting player characters against a burgeoning infernal cult for their very lives. The use of the included characters leads to a nicely balanced party and a fair, if not insubstantial, challenge as they do battle with Auldegrund, the diabolically-aligned dwarf, and his minions.

Designed for three to four hours of play, Dinner at Lionlodge is a fun and breezy adventure, though it likely won’t 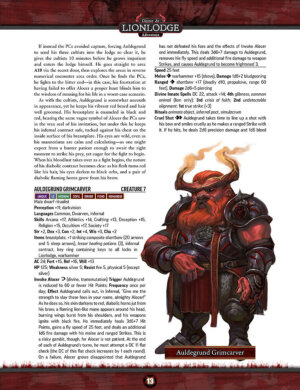 rate on any list of the greatest one shots published in 2021. Its strength lies in its ability to serve as an introduction to Pathfinder itself as well as an enjoyable afternoon for players already familiar with the system but not currently engaged in a campaign. Taken as the opening act to a larger campaign, an imaginative GM can no doubt sprinkle in an interesting twist or plot hook to expand on what’s written — another possibility provided for by author James Jacobs.

Admittedly, there’s not a lot of subtlety in what’s going on, but then again, nor is there meant to be. When the heads of sapient creatures are mounted on the wall as decorations, there’s very little mystery for players as to the character of their host. Some of it does feel a bit over the top, but your particular mileage with this will vary. Either way, it’s no real detriment to the experience.

The layout is clean and easy to follow. All relevant story text is the in first section, followed by character art, and finally maps. This provides for an uninterrupted reading flow and makes it easy to pull out relevant information when the time comes. Though the art isn’t abundant, it’s enough to give a sense of the players and the atmosphere and, as always, quite nicely rendered.

Dinner at Lionlodge offers a brief and enjoyable gaming experience, the perfect alternative to a board game night for the Pathfinder-curious. The adventure is briskly paced and hits its beats with clarity and purpose. There’s been careful thought put into party balance, so players should feel comfortable choosing from one of the pre-generated options.

TGG REVIEW
7.5 TGG SCORE
0 VISITORS' SCORE (0 votes)
Summary
Designed for three to four hours of play, Dinner at Lionlodge is a fun and breezy adventure, though it likely won’t rate on any list of the greatest one shots published in 2021.
REVIEW SCORE
What people say... Leave your rating
Sort by:

Pathfinder: Punks in a Powder Keg | Review and Page-Through