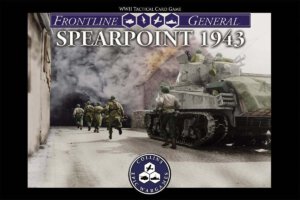 Frontline General: Spearpoint 1943 is a WWII tactical card game focusing battles between Allied and German forces in Italy during, you guessed it, 1943. The game is in a nice compact box which allows for easy transport to your next gaming night. Inside that box, you’ll find 175 cards, four d10s (two grey and two blue), and the rules sheet. The cards are broken into four decks: 50 cards make up the Allies deck, 50 for the Germans, 50 Command cards, and 25 Damage cards. The Allied and German cards are units and these include equipment such as tanks, guns and aircraft as well as infantry and the crew units for certain equipment; tanks, planes, and artillery require crews. 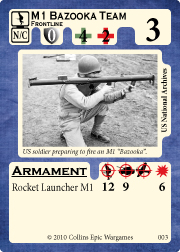 The game begins with each side choosing cards equaling 80 or 100 points, depending on the length of game you want to play, which makes your battle deck. The remaining unit cards are placed to the side as they will not be used. Each side has 284 points worth of unit cards to choose from so you have loads of choices regarding deck set up. The point values range from two points for a crew to twenty one points for the German’s Panzer VI – the Tiger I!

Once you have constructed your deck, you’ll choose four cards to keep as your starting hand and draw three Command cards. Starting forces begin in your hand and all the rest make up your reserves deck. You commit these starting forces to battle and assign them either frontline or rear line positions – artillery is a rear line unit and you’ll notice icons on each card to indicate if they are frontline, rear line, or both. This provides a sense of depth and allows for breakthrough actions.

Each player then declares who each of his units will attack by slightly turning the cards toward their target. The each side rolls a d10 and the high roller will attack first with one of their units. Attacks alternate from there. Combat is simply weapon attack values compared to defense values. The attacker will roll 2d10, adding or subtracting any modifiers, and compare the result to a hit number provided on the attacking unit’s card. Most units have more than one weapon that can be used and you’ll choose which to use based on target type: infantry, artillery, armor, or aircraft. There are rules for critical hits as well as critical misses too.

If the attack is a hit another d10 is rolled (this is known as fire intensity) and is added to the base damage factor of the weapon that hit. The defense value of the target is subtracted from the damage total and what is left is applied to the target. Each unit has an amount of damage that it can sustain and if the break number is reached (normally half of the hits the unit can take) a damage card is drawn and the effects applied to the target. It’s important to at least reach that break number, when you attack a unit, because damage points do not carry over from turn to turn. In other words, damage in a turn is cumulative but once that turn is over the target is either damaged or returned to full strength. 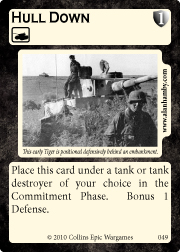 Combat and damage resolution can be a bit confusing as you first begin to play but after a few turns you’ll get the hang of it and the pace of the game speeds up.

Added into the proceeding are the Command cards. These cards throw a lot of wrinkles into the game as you find bonus modifiers to attacks or defense, special abilities, and the two dreaded Sabotage cards within this deck. I mention the Sabotage card because it allows you to immediately have your opponent discard their highest value card from their reserve deck. I’m not a fan of this card as it seems to be overpowered and, if your opponent lucks out and gets both these cards, you can find a good 30-40% of your points total go right out the window.

I’m also a little up in the air about having the ability to use captured tanks and artillery, which is included in the game, because this isn’t something that happened very often – especially in combat situations. It does add a fun wrinkle to gameplay though.

The Damage cards are a nice addition too as they have effects for each of the four unit types and are designed to be placed under the damaged unit so the appropriate effect is shown. These add a lot of flavor to the battles so you’re not just sitting there pinging hit points away from units without any sort of reduction of effectiveness.

For the standard game the victory conditions are fairly simple. The first person to score 51 points worth of destroyed (or captured) units or to be left unopposed by any enemy units for three turns is declared the victor! For some folks that might get old pretty quick and that’s why you’ll find a variety of scenarios (called situations) available right here. Once you have a handle on the rules you should be able to play through a game in about 30 minutes making this an uber wargame filler!

I’ll make a few suggestions for those of you who pick up Frontline General: Spearpoint 1943: 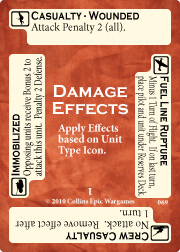 Have a handful of d20s to keep track of damage points as it can become a bit confusing once the battle is in full swing. You might also want to have a few markers available to track who has fired as well.

If you’re going to sleeve the cards you’ll want to find a bit larger box to carry the game around in as the sleeved card won’t fit in the original box. The cards are good quality but you might want to sleeve them none the less as this game can get a lot of play.

Download the situations as well as the suggested deck builds. Creating a force deck can be a daunting task when you first learn the game so the deck builds come in handy. There’s also a nice little victory point track sheet available at BGG.

Finally, a special thank you to designer Byron Collins for demoing Spearpoint 1943 for Elliott and I at this past Origins! If you have an opportunity to run across Byron at one of the wargaming cons, be sure to say hello.

To wrap up, Frontline General: Spearpoint 1943 is a must have for any wargamer worth their salt and for those who enjoy a great tactical card game. Obviously, Collins Epic Wargames is a small company but the quality of what they’ve put together with this game speaks volumes. There’s loads of replay value here and the inclusion of downloadable scenarios adds even more to the mix. Currently, two expansions are in the works with one adding terrain tiles in which to battle over as well as possibly another which will cover a different theatre or add more units to the game. I’m not positive about the second expansion though…

I think I can say that Frontline General: Spearpoint 1943 just may be my favorite game I had an opportunity to be introduced to and play at Origins 2011. This just might be the best $29.95 investment you’ll make for your gaming table!

TGG SCORE
9 TGG SCORE
0 VISITORS' SCORE (0 votes)
Summary
I think I can say that Frontline General: Spearpoint 1943 just may be my favorite game I had an opportunity to be introduced to and play at Origins 2011. This just might be the best $29.95 investment you’ll make for your gaming table!
REVIEW SCORE
What people say... Leave your rating
Sort by:

Byron Collins and ‘Polyversal’ at Origins 2017

Jeff and Elliott, thanks again for coming by at Origins 2011. Had a great time demonstrating the game there with you guys. Thanks for the great review and I’m glad you enjoy the game!

– Frontline General: Spearpoint 1943 Eastern Front – This is an Eastern-front based Spearpoint game that adds all new cards including Russian and German Units. It is fully compatible with the base set and is a second standalone game in the system. It can also be expanded by the above map-based expansion as we’ll have specific map-based scenarios for the Russians/Germans. This too is available for preorder.

– Frontline General: Spearpoint 1987 was just announced. This game is set in the cold war and covers a hypothetical conflict between the Soviets and US. Designer James M. Day (who designed MBT for Avalon Hill, IDF, Panzer, etc.) is taking our basic system and applying it to equipment from the late 80’s. Really excited about this one!

Thanks again for demoing for us, Byron. Keep us in the loop as far as the expansions because we’d love to do some sneak peek pieces on them!

Yes, just got another chance to play Spearpoint against my teenage son, and he beat me! Some excellent rolls and a couple of dumb mistakes on my part was my downfall. Note to self: Having no units in my deck that can defend against aircraft is bad. Great game Byron.