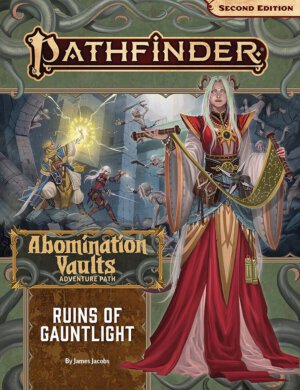 Ruins of Gauntlight is the first chapter in the Abomination Vaults adventure path and designed for first-level characters. By the end of the chapter, characters should have progressed to fourth-level, thanks to a rapid fire series of combat encounters.

More than anything, combat is the name of the game with this chapter. While some skill checks are called for, plot-relevant opportunities for meatier roleplaying are sparse. Likewise, problem solving hinges less on clever 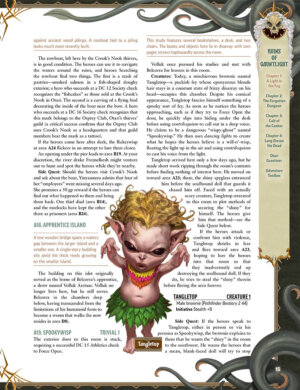 application of skills and more on the luck of the roll. For parties with “murder hobo” tendencies, Ruins of Gauntlight will absolutely scratch the itch for plunder and violence without major consequence. In other words: it’s a smash and grab, loot and shoot smorgasbord.

That being said, there are certainly some entertaining environmental and character details. Ruins of Gauntlight offers its own entry into the “Creepy Doll” canon of horror with Mister Beak. NPC Wrin Sivinxi’s tendency to see safety in curves but danger in angles is a clever nod to Frank Belknap Long’s and August Derleth’s Hound of Tindalos, as well as Lovecraft’s Keziah Mason — perhaps a more fitting comparison given the ghost of the evil Belcorra.

There’s a good variety of enemies and scale of difficulty increases appropriately with time and depth in the dungeon itself. Ruins of Gauntlight lends itself particularly to new players eager to acquaint themselves with Pathfinder’s mechanics as well as seasoned veterans simply looking to enjoy a good old fashioned smackdown.

While there’s plenty of horrific elements within the dungeon, ranging from corpses to torture chambers to grim necromantic implements, the adventure never crosses into true horror territory. Despite the allusion, this is not a game of Lovecraftian doom; the evils players encounter can and must be defeated. The real tension comes in the 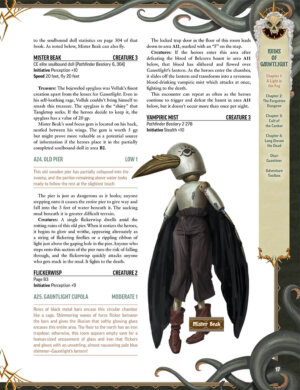 roll of the die rather than in the fear of what might be behind the next door.

Ruins of Gauntlight does, however, contain themes pertaining to suicide. Given the sensitive nature of this topic for some, Paizo’s inclusion of a prominent content warning is a considerate gesture as is the explicit description to modify descriptions as appropriate if necessary.

As with other Paizo products, Ruins of Gauntlight is in an easy to read in a format and benefits from full color art that helps to establish characters and setting. Along those same lines, the maps are clear and help to clarify how the rooms and passages interconnect, helping to prevent player confusion in navigating the area.

Ruins of Gauntlight won’t go down as genre-defining adventure for Pathfinder, but it nevertheless provides an entertaining and challenging experience with a setting that revels in the tropes of fantasy horror. New GMs will have no trouble running the adventure while more experience storytellers may enjoy the opportunity to tweak the story’s difficulty for more advanced parties.