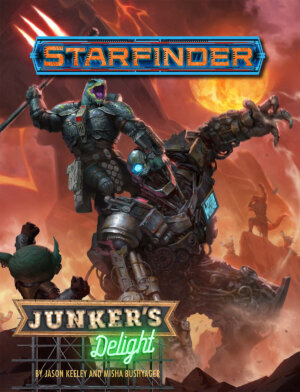 Starfinder takes a detour through the scrapyard wasteland in Junker’s Delight, a fun and well-rounded introduction to the system for players and GMs alike.

Junker’s Delight centers on the wreck of the Stellar Flare, a science vessel that crashed into the planet of Akiton centuries ago, not long after the Gap first made the Drift widely accessible. The Flare was once home to a group of scholars and scientists who believed it was possible to draw energy directly from the Drift, bypassing the need for batteries and revolutionizing the energy industry. An accident, however, soon doomed the Flare and its crew, leaving no survivors, save for the partial body of android Vari-8. When the action opens, our heroes find themselves thrust not only into the search for Vari-8’s descendent –who has recently arrived on Akiton in hope of discovering the Flare’s whereabouts– but into the middle of a contentious junker’s gang war and under the gaze of a budding criminal empire. 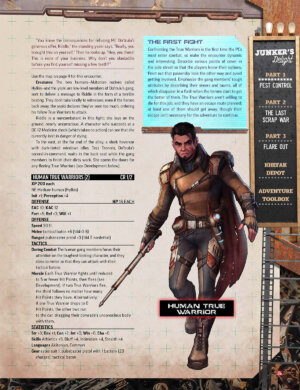 Junker’s Delight is Starfinder’s first official standalone adventure and it’s clearly oriented towards new players and new GMs. There’s tips and explanations, as well as specific references for rule and stat explanations. There’s advice should players get clever and deviate from a path or if performance and a roll result don’t quite match up. None of this is overly prescriptive and GMs are encouraged to explore and decide what works best for the group as a whole.

One of the measures of a successful introductory standalone adventure, then, becomes how well it can show off different systems and mechanics within the overall architecture of the game. Combat is obviously essential but what about exploration or problem solving? How about diplomacy? Do characters from a variety of skill sets get a potential moment in the sun? Most importantly — do these beats land naturally or do they feel forced?

Junker’s Delight manages to thread the needle, offering GMs and players a well-balanced taste of what it can mean to play Starfinder. Combat is prevalent, but players also have the opportunity to explore, to broker peace, to sidestep traps and hazards, and even to lay some of their own. For those truly coming in cold, Junker’s is a smartly designed system tour backed by likeable NPCs and powered by no small sense of adventure.

That being said, this is very much a beginner’s adventure. The narrative is fairly linear and the plot straightforward. More experienced GMs may feel the advice is overbearing or otherwise unneeded while more seasoned players may find themselves frustrated by the relatively straightforward structure and lack of built-in support for choice. The world of Khefak Depot is surprisingly vast and rife with plot hooks, including a budding water rivalry for the ages, meaning that the supplemental section on the region and its players may be of more substantial interest; GMs looking for an interesting setting or a more pointed way to bring modern allegory to 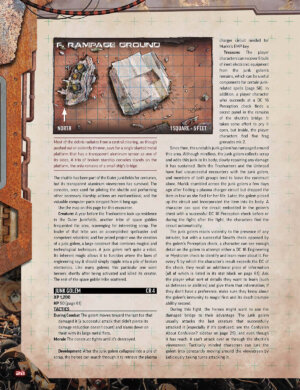 the table will undoubtedly find something to suit their needs.

While Starfinder titles consistently benefit from visually appealing page design, Junker’s Delight deserves special mention for its border art and elements. With rusted and busted lights, battered scrap metal, and type that feels more like Fallout, it’s certainly not a typical Starfinder aesthetic, but its contribution to setting the mood is undeniable. The character and full page art is much more inline with what one might usually expect, though no less for its more traditional approach. Navigating on screen is no challenge and a clean two-column layout with the occasional callout box helps keep readability at the forefront.

Junker’s Delight sets out to meet a specific need for a specific audience and does so through a fun and engaging adventure that helps ease all parties involved into the rhythm of gameplay typical of Starfinder. While the campaign is linear and relatively light on player choice as a driving force, this is by design and done in service of the intended audience of new gamers. Though more experienced players may wish to pass on this one, its supplemental material still contains some truly excellent and thought-provoking storytelling opportunities for GMs to make use of in independently-crafted campaigns.