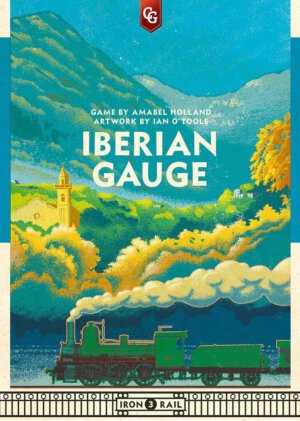 Jeff shares his thoughts about and reviews the 18xx board game Iberian Rails from Capstone Games. The game tasks you with creating rail routes across 19th Century Spain and is for three to five players, ages 12+, plays in 60 to 90 minutes, and carries an MSRP of $39.95. Plus the latest tabletop gaming news from GMT Games, R. Talsorian Games, Plaid Hat Games, Mundos Infinitos, Tau Leader Games, and more.

4:17 Tabletop gaming news of the day
23:21 What’s on the horizon this week
29:10 Discussing how to play Iberian Gauge
54:29 Final thoughts and a review score
1:02:05 Wrapping up
TGG REVIEW
9 TGG SCORE
0 VISITORS' SCORE (0 votes)
Summary
Iberian Gauge is a fast and fun 18xx experience which can be completed in around an hour or so, even with a full compliment of five players. For a game with a side two sided page of rules there's a good amount of depth as well. Granted, the board isn't the most exciting and I'd have preferred a different way of tracking railroad treasuries and player fortunes rather than constantly making change with money cards. Those quibbles are minor though, as the gang and I have really enjoyed playing Iberian Gauge.
REVIEW SCORE
What people say... Leave your rating
Sort by:

Catherine: The Cities of the Tsarina Arrives in July from Capstone Games