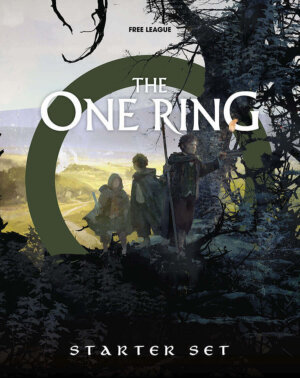 Title: The One Ring Starter Set

Pages: 108 pages divided among three books, plus maps and accessories.

Free League Publishing is releasing a new edition of The One Ring, the Middle-earth RPG originally published by Cubicle 7 Entertainment. This review covers the PDF of the Starter Set.

The One Ring Starter Set has a limited goal: to introduce new players to the game by having them play a set of pregenerated characters through a series of adventures included in the set. There are three booklets in the set, as well as character sheets for the eight pregens and other accessories.

The first booklet is The Rules. As one might expect, it is a summary of the task resolution rules of The One Ring. It does a decent job of explaining the rules, which is a hard task, given that TOR’s die roll system is more complicated than the average RPG. It’s an additive dice pool, where you roll a d12 plus a number of d6es and add them together to try to beat a target number. However, there are special symbols The rules booklet doesn’t explain how to use regular dice for this game instead of Free League’s custom TOR dice. That is probably because the physical box set will contain a set of the custom dice. However, if you only have the set in PDF and don’t own the custom dice, you may have to come up with your own solution.

The second booklet is a gazetteer of The Shire, home of Tolkien’s hobbits and the setting of all of the included adventures. This booklet includes sections on each of the Shire’s Four Farthings, plus Buckland and the Old Forest, which lie outside the Shire’s formal borders. It details several significant locations, gives a few adventure 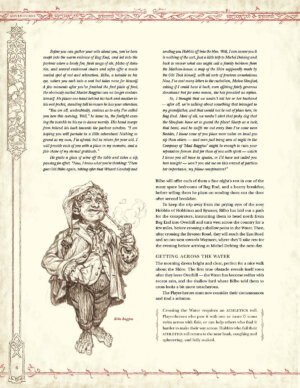 hooks, and lists random encounter/event tables for several regions and locations. These resources make The Shire the most useful of the three booklets for a Loremaster who already owns the core rulebook.

The third booklet, The Adventures, is a series of adventures set in the Shire. The adventures are designed to be strung together as a mini campaign featuring the eight pregenerated characters included in the set. Unfortunately, these adventures, while full of treats for Tolkien fans, are the weakest part of the set. They are often on rails, with little instruction for a novice LoreKeeper about how to react if the players go against the adventure’s expectations. For example, in one adventure, the Player Heroes are expected to make social rolls to persuade an owl to leave a farmer’s barn. There is no advice about what to do if the players don’t pick up that this is how they’re supposed to handle the situation. If they decide to be murderhobos and try to kill the owl, you can easily refer to the combat rules. But what if they try to lure it out with food, owl calls, or an owl decoy of the opposite sex?

Another problem with the adventures is that they don’t give instructions on how to handle switching pregenerated characters. This is an important issue because, though the players start with only six characters to choose from, two famous Middle Earth adventurers become available a Player Heroes during the course of the mini campaign. However, in the adventures after they become available, these characters are part of beginning read-aloud text, and there is no word on how to handle this text if one of the players is playing that character. These problems can easily be handled by an experienced Loremaster, but they can be an issue in the common situation of a group using a game’s starter set to introduce themselves to tabletop roleplaying. Some of the problems with the adventures might even paralyze a Loremaster who has never GMed before.

The accessories in the starter set are well done, including the pregenerated characters. Each pregen’s character sheet not only gives game stats for the character, but also a reason to become involved in the first adventure of the mini campaign, a personal quote, and a background that ties them to the setting and Tolkien’s work. There are printable war gear cards that give a picture of each weapon in the starter set, as well as their game statistics. The stance and journey card appears well-done, though it is more of an inducement for owners of the core rulebook to buy the starter set, since it uses rules that this set barely touches on. The maps, like most of the art in the booklets, evokes the charm and wonder of reading your first fantasy book as a child and dreaming of strange yet familiar places.

In short, this starter set has much of value, particularly to those already familiar with roleplaying and Tolkien’s mythos. The Shire booklet, the Stance and Journey Card, and the map of the Shire are all draws for such players. However, it is not very good at the standard mission of a starter set, taking a group of novice players, including a novice GM, and teaching them how to play and run the game. Since this review is specifically of the PDF version, it is worth noting that the physical set will have more value added, in the form of physical custom dice and full-sized physical maps. 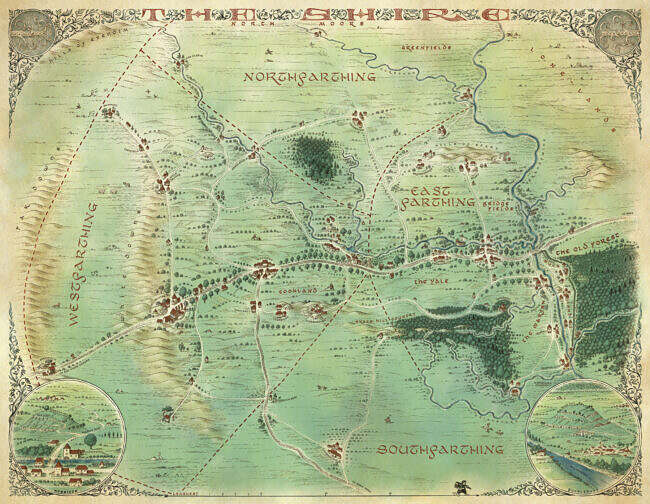 TGG REVIEW
6.5 TGG SCORE
0 VISITORS' SCORE (0 votes)
Summary
The One Ring Starter Set is a charming product and a useful tool for experienced Loremasters to introduce new players to the game. However, the starter set's structuring is not well suited at all to teach a novice Loremaster how to run a game. Also note, if you pick up the physical starter set, please try to find out if the misprinted dice have been fixed.
REVIEW SCORE
What people say... Leave your rating
Sort by:

Kevin R. Smith (not to be confused with the director) was a late bloomer in the hobby, not playing in an RPG group until he experienced AD&D 2e at his college gaming club. Currently, he plays Pathfinder 2e regularly and other games when the chance presents itself.

Into the Odd Remastered is on the Horizon