On the Edge of War: Pathfinder Adventure Path #185 – A Taste of Ashes Reviewed

A Taste of Ashes finds the player character in Yled, one of Geb’s border cities Nex. A center of trade and military might, Yled’s citizens have grown uneasy as the pace of the coming war seems to quicken on the news of the poisoned food discovered in The Ghouls Hunger. With the Warmaster Council in charge and the great factions scrambling for power and influence, the player characters must track down the source of the shadow ash and find the proof that will finally allow them to pull back the curtain on Chancellor Kemnebi’s plot before it’s too late.

The best pre-written campaigns don’t just tell a compelling story for the players to experience; they support and elevate the GM, offering them new tools for their own campaign creation toolbox by modeling, explaining, and advising so that the framework can be understood and adapted. A Taste of Ashes masterfully enmeshes players in the tension of a city braced, yet unprepared, for war and the care that must be taken when making waves in such an environment. It offers a means of discouraging disruptive behavior and a series of natural, logical consequences should players choose not to heed the warnings. It adds depth to the world and highlights that, even in a nation of undeath, war is not without consequence and remains a heavy weight on the collective consciousness.

What’s most impressive is that it does all of this without the sense of setting players on a preset, linear path. While there is a strong narrative throughline that gives A Taste of Ashes a nice sense of cohesion, characters drive their own experience of it contributing to an open world feel, even as the text doesn’t explicitly craft that approach.

Despite the appropriate rise in tension, A Taste of Ashes isn’t without some of the broader path’s signature theatrics — quite literally in this case. When the pursuit of one of Kemnebi’s key allies requires a trip to the theater, the party soon finds themselves drafted as supporting players in the night’s festivities. Once again, however, Brian Duckwitz takes the time to tip his hand on a bit of GM advice, offering a clear path of escalation for ensuring reluctant player characters take the bait and play along well enough to keep the chapter on its rails.

One of the Blood Lords Adventure Path’s other strengths has been its insistence on demonstrating that evil does not necessarily equate to rude and that, conversely, warmth and pleasantries do not automatically suggest good. Geb’s spymaster Seldeg reappears in this chapter and is shown to treat his living servants well, engendering their freely given loyalty; by contrast, the much friendlier Berline’s living staff live in a state of terror. It’s a fun reminder that evil characters can be likeable, charming, and helpful — and that nuance can be a compelling tool when crafting characters and worlds.

A Taste of Ashes is a compelling escalation of stakes and tension in the Blood Lords Adventure Path and sets the stage for memorable finale showdown. While players will no doubt enjoy themselves, GMs looking to build their skillset or just take a look at the mechanics of world and player management through fresh eyes will also find much on offer.

Sami Yuhas
Writer, gamer, and necromancer bard (at least in D&D). Sami focuses primarily on board and tabletop gaming, with a focus on sci-fi and fantasy, as well as worker-placements and co-op titles. She prides herself on the ability to overthink world building in games, and cites a three post manifesto on the costuming of XCOM 2 as among her greatest nerd achievements.
Latest posts by Sami Yuhas (see all)
Tags: Paizo Inc, Pathfinder, Pathfinder A Taste of Ashes, Pathfinder Blood Lords 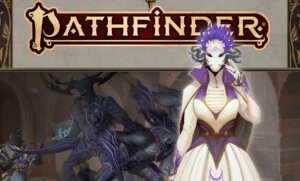 On the Edge of War: Pathfinder Adventure Path #185 – A Taste of Ashes Reviewed

A Taste of Ashes offers GMs a bevy of insights into player and story management as it throws the party into Yled, a city on the edge of war, in a standout penultimate chapter from the Blood Lords Adventure Path.
8.5
Excellent