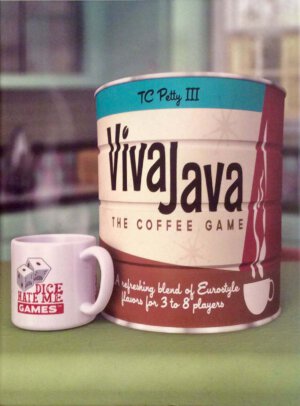 Katie bar the door, Jeff’s reviewing a Euro! Yes, everyone knows I dislike many Eurogames and whenever one comes across for review I usually savage it as if I were an ex-girlfriend talking about John Mayer… Readers and listeners know I don’t get into most Euros!

The problem there is I don’t hate them at all; I simply don’t care for games which I find boring or not engaging and, unfortunately, many of the Eurostyle games I’ve encountered leave me cold. Our approach here is do we have a good time with a game and did the majority of the people we played it with have fun? This is regardless of where the game originates or the mechanics it utilizes. If the answer is yes then it’s a good game no matter where it comes from or who designed it. It the answer is no? Well… John Mayer anyone? 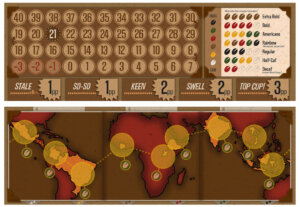 That said I’m going to take a look at Viva Java, a game where three to eight players compete to blend the hottest (no pun intended) coffee blend in cafes and coffee houses around the world. To do so they’ll send their very own Juan Veldezes across the globe in order to secure the right beans while also  investing in research at home to create the perfect cup.

Let’s begin by pointing out the components of the game are excellent. From the game boards to the player cards to the various tokens everything is quite nicely done. One slight issue I will mention is some the wooden “beans” which are used are a bit too similar in color to easily differentiate but that’s something I easily took care of by simply adding a small paint dot to the center of one set to make them stand out from the rest.

Your goal is to amass the most Performanace Points by the end of the game. Much of the time you’ll earn PPs by the blending of coffee. Although you’ll score the most PPs from your own blends you can also gain points by researching new harvesting and blending techniques or by investing in blends other players have created. You just can’t sit back on your laurels though – yes I’m talking to you Folger’s – because as the game progresses you earn fewer and fewer points from older blends as the coffee drinking masses clamor for new flavors.

You’ll set up the game by laying out the two folding boards – The World Map as well as the Performance Track, placing the beans by color into matching piles called The Fields, you’ll also select the Average Joe Blend and another random Blend Slate on the Performance Track in the top two sections (Hot Sellers) with beans of the required color for the Blends on the cards. Each of the three Regions also gets a randomly selected blend placed above it indicating what beans are available in the three countries below; from left to right you’ll place a single bean of that color in order, as on the Slate, on the countries below. Each of these nine countries also receives a randomly selected Country Token indicating a positive or negative bonus for that country. Finally each player receives their own set of playing pieces, a Research Lab card, and a Roaster Bag. Into the bag go two white beans and one yellow bean from the Fields.

Each turn (or round) is broken into three phases:

In the Field: Each player, in reverse order of points as in the person with the fewest points places first, selects a region of the map to place their Field Researcher. Each country will provide a positive or negative bonus depending on the token in place and the results of that token take place immediately when a Researcher is placed there. The player can then collect the colored bean from that Country.

The turn sequence is fairly simple as players take actions based on reverse point total order. This acts as a bit of a catch up mechanic, as there are advantages to going first, but it’s not too intrusive. Plus, those who invest some time in to putting together a strategy, going later can gain some advantage too.

Blend/Research: The countries are grouped into three Regions and all players with Researchers in that Region consist of a team that turn. Teams then must decide among themselves if they will Blend or Research. Blending requires a minimum of five beans, and the team is looking to blend the Blend Slate which is above the Region of the map their Researchers occupy, so early in the game teams will probably Research.

Each member of a team choosing to research will receive research points which they can spend to increase that player’s abilities to harvest, blend, or invest. These tracks allow you to change how many beans you get at locations in the world, how you draw beans out of your bag when you blend, and also allow you to get special action cards. The research tracks also yield PPs at the end of the game.

The heart of the game, though, is blending, and this is the activity that (for my money) makes VivaJava a remarkable social — and strategic — game. Teams who decide to blend must collect five beans, at least one from each player, randomly drawn from each player’s roaster (bag). The goal is to create a combination of colors that is prized (and thus, worth points) by consumers. Blends are ranked according to a poker-like progression of color combinations. Five beans of the same color (Extra Bold) – a very difficult blend to achieve, is the more valuable than four of the same color (Bold), which is in turn more valuable than a “full house” (Americano), and all the way down to a lowly pair (Decaf). Teams will usually want to cooperate and make the best blend they can, but it’s also quite easy to sabotage a blend that might benefit the leader too much. Also keep in mind the players on a team can go in any order selecting their beans but each player must contribute one bean no matter what.

Scoring: Once all the blending teams have created their new blends, these are ordered in the market. The best blend awards three points to each player who helped to create it while lesser blends produce fewer points. Finally each round players receive Performance Points (VPs) for the various coffee blends which are on sale. Also every round the blends will degrade as they lose one of their beans and it’s removed from the Blend Slate on the Performance Track. This means the biggest seller will eventually lose popularity and move down the Performance Track as newer and hipper blends hit the market. Blends which are still on the World Map are shifted east and new blends are drawn to replace any empty spots; the World Map is repopulated with beans to match the current Blend Slates on the board. 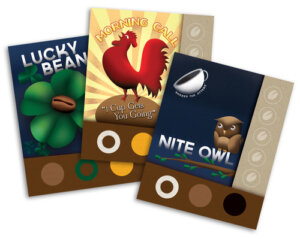 There are several conditions which can trigger the game end: First player to 21 Performance Points, not enough Blend Slates to repopulate the World Map, or when any player reaches the final research spot on four of the five tracks on the Research card. Obviously in the first and third cases the winner is the person who triggered the end. If the map can’t be refilled, the person with the most PPs is the java master of the world! Or at least the winner of the game…

Additional variants are included in the rules for making the game easier for first time players, using featured Blends, playing with three or four players, and more. This adds a lot of variety to the game and also allows you to take it off the shelf when you have fewer than the optimal eight players. I know some people are talking about VivaJava as a party game and, while it is an excellent social experience, I don’t think I’d classify it as such. There’s a lot going on in the game and I believe it’s a much tougher sell to the traditional Pictionary/Scattergories party gamer. This doesn’t make it a bad game in the least; just not a “party game.”

I like VivaJava quite  lot! There’s much more strategy involved than one would guess reading through the rules and you never know when your teammates in a given round are looking to help you or hurt you. Everything about the game feels right and works together. Sure, it’s a little bit of a tough slog the first few rounds when no one knows the game yet and you could see the game time balloon to over three hours if you’re playing with people you can’t convince to perform the researching or blending at the same time. Once everyone has the mechanics down and realizes it doesn’t really matter what any other teams are doing, you should be able to run through to completion in a couple hours or less with a full compliment of eight players.

Honestly, where I think VivaJava shines best is in it’s ability to A) produce an interesting whole while really providing a good sense of narrative and theme and, B) keeping everyone at the table involved. This isn’t one of those “vacuum Euros” where the player interaction is minimal so you could be playing with a group of mannequins. VivaJava keeps things hopping without dumbing anything down.

All told VivaJava is better than a chocho-mocha-latte-half-caf-iced-chino at your favorite coffee bar!

TGG REVIEW
9 TGG SCORE
0 VISITORS' SCORE (0 votes)
Summary
I like VivaJava quite a lot! There's much more strategy involved than one would guess reading through the rules and you never know when your teammates in a given round are looking to help you or hurt you. Everything about the game feels right and works together. Sure, it's a little bit of a tough slog the first few rounds when no one knows the game yet and you could see the game time balloon to over three hours if you're playing with people you can't convince to perform the researching or blending at the same time. Where I think VivaJava shines best is in it's ability to A) produce an interesting whole while really providing a good sense of narrative and theme and, B) keeping everyone at the table involved. This isn't one of those "vacuum Euros" where the player interaction is minimal so you could be playing with a group of mannequins. VivaJava keeps things hopping without dumbing anything down.
REVIEW SCORE
What people say... Leave your rating
Sort by:

First Look at ‘Warhammer: Doomseeker’ on The Daily Dope for September 25th, 2018

‘Bottom of the 9th’ Shipping Soon from Dice Hate Me Games

Be the Top Chemist with Dice Hate Me Games’ ‘Compounded’