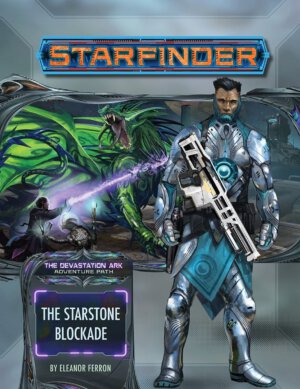 It’s a desperate scramble for survival in The Starstone Blockade, the second chapter in Starfinder’s The Devastation Ark adventure path, as Ark Prime engages Absalom Station.

Following the events of Waking the Worldseed, a massive vessel of unknown origin has entered Pact World space. Ark Prime, a Sivv Dominion colony ship, has been called home by the activation of the Worldseed’s beacon. Designed to restart sivv civilization at any cost, Ark Prime’s appearance feels like a natural, if significant, escalation of the threat and portends a massive challenge for players.

Eisyfina Nott, the party’s AbdarCorp contact, once again seeks assistance and offers characters a substantial payday: up to one million credits just for speaking to the Directorate. 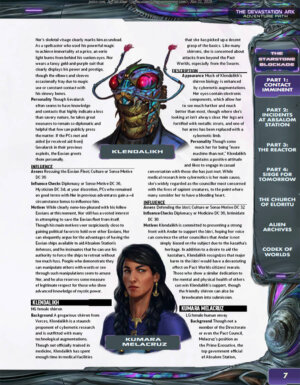 The section on the characters who make up this body is a delight. Eleanor Ferron manages to convey enough of the history and motivation behind each councilor to form a memorable interaction without bogging GMs down in extraneous detail. The layout team likewise deserves high praise for this, as the section is easy to navigate and important details are easily referenced with a glance. Any one of these NPCs could be easily take a larger role, perhaps offering players hungry for political clout an additional, unscripted challenge.

Meeting with the Directorate offers interesting challenges in political and interpersonal maneuvering as players seek to algin the competing concerns of the councilors with their own ends. While securing aid for Absalom may be simple enough, rescuing a daring but rogue Eoxian fleet and ensuring the survival of the Idari prove far more difficult. Each situation to be resolved offers its own scripted solutions, but GMs may want to encourage player creativity in proposing solutions to clear the relevant dice checks.

The real meat of the adventure, however, is in battling the chaos unleashed across the station once Ark Prime disables its generators. Players are almost immediately plunged into combat, but it rapidly becomes apparent that it may be the least of their problems.

Putting out fires —both literal and otherwise— manages to be both a sprint and a marathon. The clock is ticking and the various situations that crop up around the station can and will deteriorate if they are not addressed. This means players will be functionally unable to take long rests, requiring careful decision making when it comes to resource management.

On one hand, this is an incredible opportunity to bring in other atmospheric details, heightening the intensity and driving home the scale of this emergency. While player characters will have no shortage of access to information about the state of the station, they will not be able to handle every crisis — nor are they meant to. This gives action meaning and weight; player characters are truly on the clock to save lives. 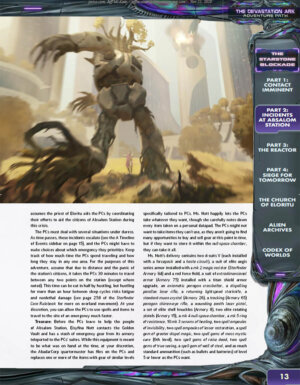 On the other hand, these emergencies include trapped workers, medical catastrophes, and those sucked out into space when the station’s forcefields were taken offline with the power. For players who have had experience with real life disasters, some of these details may be too intense or prove to make the experience more upsetting than exhilarating, especially as it becomes apparent these problems may not be something that player-characters can devote time to solving. GMs should consider either holding a session zero to establish content boundaries or including a X card in case one of these elements becomes too much.

Even once the station has been stabilized, however, the players face one last challenge: finding a way aboard Ark Prime. It’s here that the players’ choices really stand to help or hinder their efforts and the ensuing space battle truly does feel epic.

The adventure ends on a cliffhanger however, as players are overwhelmed by sivv propaganda, setting the stage for the conclusion.

The Starstone Blockade offers a microcosm of just what makes Starfinder compelling: interpersonal maneuvering, creative problem solving, and a battle with unimaginable stakes. The adventure offers a visceral taste of the sivv threat and does it with aplomb — players will be clamoring for more even as they rush to catch their breath. The Starstone Blockade offers players a chance to be truly heroic, even when they cannot be all places at all times solving all problems, and rewards them for good, reasoned decision making. As a second act, the adventure seizes the promise of Waking the Worldseed and runs with it, resulting in a truly exhilarating experience.