All of the (undead) chickens come home to roost in Ghost King’s Rage as the player characters finally turn their sights on taking down Chancellor Kemnebi once and for all.

Blood Lords has never been an Adventure Path overly concerned with jumping right into the meat of the action and this time is no different. However, while this has sometimes left ostensibly urgent adventures somewhat lacking in that real sense of urgency, here, it works. As the player characters have risen through the ranks of the Blood Lords and grown more entrenched in faction politics, downtime has become a necessity to further those personal agendas which now come into play. While the pay off on factions isn’t necessarily as bombastic as one might hope for, there’s still satisfaction in seeing alliances and enmities cultivated over the whole of the Adventure Path come to bear.

However, it’s not just faction alliances put to the test this time, but personal ones. While player characters may have invested time in faction relationships, it’s much more likely that they’ve formed more personal ones with their once beneficiary, Berline, and Geb’s spymaster, Seldeg. The Ghost King’s request, Berline’s last gasp and Seldeg’s armor, is an optional one that does stand to benefit players, but at an undeniably substantial cost. Whether players manage a creative solution, opt for honor among thieves, or throw their former allies to the wolves, it’s a fascinating moral choice that still works even within the context of a Neutral or even Evil adventuring party.

Ghost King’s Rage calls to mind the old saying about politics and strange bedfellows; it seems the Chancellor’s plot has much the same effect. The adventure sees player characters not only breaking into the Boneyard, a kind of hospice and holding grounds for damaged souls, to bargain with one of the psychopomp caretakers, but negotiating with a ghostly lord who has allied himself with Kemnebi for the simple fact that he despises Geb. It’s a smart way to highlight that, for Blood Lords, a silver tongue can be just as useful as a sword — an idea that has repeatedly popped up over the course of the Adventure Path.

While there is no doubt room for further adventures within Geb, there are few if any immediate hooks. If player characters were foolish enough to double cross their psychopomp ally, however, they likely won’t have very long to savor their success.

The Blood Lords Adventure Path combines social intrigue, political maneuvering, and straightforward adventure in a setting that, more often than not, leans into its undead setting with tongue firmly in cheek. While there is certainly an element of camp, it is nevertheless a compelling adventure and a chance for even the most morally-inclined players to have a little fun chewing the scenery and walking on the wild side. Ghost King’s Rage serves as a fitting conclusion to the saga and helps tie up loose ends and deliver a satisfying victory for the party while still keeping things fresh and exciting.

Jeff McAleer
Founder/Editor-in-chief of The Gaming Gang website and host of The Gaming Gang Dispatch and other TGG media, Jeff tackles any and all sorts of games but has a special fondness for strategy, conflict sims, and roleplaying games. Plus, he's certainly never at a loss for an opinion...
Latest posts by Jeff McAleer (see all)
Tags: Jessica Catalan, Pathfinder, Pathfinder Blood Lords, Pathfinder Ghost King's Rage

This Spring Brings The Lord of the Rings: Adventure to Mount Doom 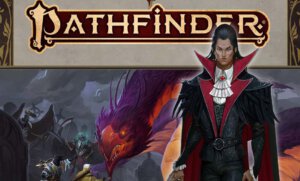