Year: Slated for a 2023 release if funded on Kickstarter

I share a bit of a how to play and my review of Shake That City from AEG. The family friendly, gateway game is hitting Kickstarter on November 29th. Should you be shaking in anticipation to back this Kickstarter project? Or should you shake the dust off your boots and mosey right on past this city?

1:06 Diving into Shake That City
16:31 Final thoughts and review score
20:33 Wrapping up
Jeff McAleer
Founder/Editor-in-chief of The Gaming Gang website and host of The Gaming Gang Dispatch and other TGG media, Jeff tackles any and all sorts of games but has a special fondness for strategy, conflict sims, and roleplaying games. Plus, he's certainly never at a loss for an opinion...
Latest posts by Jeff McAleer (see all)
Tags: AEG, Kåre Torndahl Kjær, Kickstarter, Mads Fløe, Shake That City

This Spring Brings The Lord of the Rings: Adventure to Mount Doom 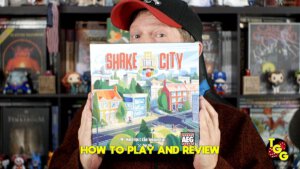 If you're a fan of AEG's recent line up of lighter weight, family friendly games then you'll certainly enjoy Shake That City. The game makes for a nice gateway title to introduce newcomers to the hobby. Shake That City has wuite a bit of a Tiny Towns vibe to the proceedings, which is fine with me since the gang and I are big fans of TT.
8
Good