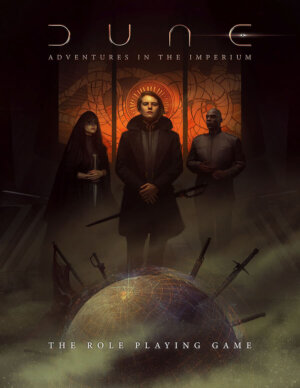 Title: Dune – Adventures in The Imperium

MSRP: Approximately $61.69 for the standard hardcover or $19.99 for the PDF at DriveThruRPG

Dune – Adventures in The Imperium brings Frank Herbert’s landmark science fiction novel to the gaming table once again, this time as a fully-fledged tabletop roleplaying experience.

Adapting Dune is no small task. With more than twenty novels, the world is vast, detailed, and dense, powered by politics, conspiracy, and the rise and fall of empires. The board game, recently released in a new edition, has been well-received and while the forthcoming film adaptation faces no shortage of skepticism, it is also the source of no shortage of hype. It also bears special mention in this case, as Legendary and the filmmakers are specifically thanked. 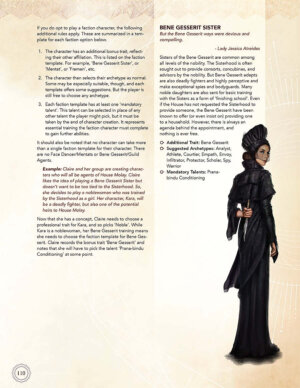 The team at Modiphius has done an admirable job of translating its passive source material into an active gaming experience. From a systems perspective, the mechanics are well-designed, well-executed, and well-explained; on the last front, the book even includes a helpful quick reference in the appendix. The two levels of play, Agent and Architect, allow for a variety of approaches to a story hook and do a nice job of mirroring the micro and macro levels of intrigue and influence that underscore much of the source material’s world.

The art is simply stunning. The front cover on its own does much to set the tone, and is supported at every turn by column, half-page, and two-page spreads highlighting locations, characters, and other world elements. Page-to-page design elements are stately and elegant, helping to reinforce the world’s visual sensibilities without impeding legibility. The two-column text layout helps keep screen-reading manageable, though a lack of hot-linked table of contents or index in the PDF make it a subpar experience.

But is Dune any good?

In addition to the challenge of adapting the novels for play, Modiphius also faced the dilemma of appeasing diehard fans while opening the door for those just coming to the party. To that end, the book features 70 pages of worldbuilding exposition. For those already in the know, it’s easy enough to skip over these pages; they contain no information on House or character creation, nor any of the core gameplay elements.

For newcomers, it’s the make or break. To be clear, this section is handled beautifully. The prose is engaging and easy to follow; the level of detail informs the reader without overwhelming them; and information is broken down in such a way that it’s easy to return to and reference later on. As far its ability to neatly layout the key events, players, and places in Herbert’s expansive universe, it’s a resounding success. There is no flaw in the execution and the writers deserve hefty praise. 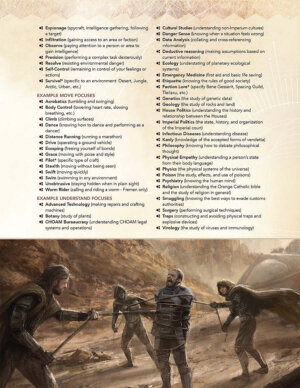 The challenge is Herbert’s world itself, as those who haven’t read the novels will either decide the setting is for them or not. While the book’s influence in the broader development of twentieth century science fiction can’t be understated, Dune is still a product of its time — and sometimes, that shows. The idea of a shadowy, all-female organization with countless agents all working towards the ultimate goal of producing a male agent under the control of said organization is not a concept that’s going to work for everyone. Some will hop right on board; others will roll their eyes. Enjoyment of the game is, to some extent, predicated on enjoyment of or interest in the world. If that doesn’t click, it all falls apart.

This may prompt some comparisons to other recent adaptations of popular science fiction properties, especially Fria Lagan’s Alien and Green Ronin’s The Expanse. In the case of the former, the system stands alone as a unique and reskinnable horror engine, any number of threats able to stand in place of the xenomorph. With regard to the latter, the design treats the matter of adaptation as a toolbox; players are free to hone in on the elements they find most compelling while leaving the others to the side. At the heart of Dune is its setting, and the game’s structural design choices are all ultimately made in service to it.

Dune – Adventures in The Imperium hits all of the right notes to be a great adaptation and that, ironically, manages to be both its greatest strength and a major weakness. For fans, it’s a no-brainer; it’s thoughtfully designed and skillfully brought to fruition, supported by sumptuous art and solid mechanics. Strong writing opens the door for newcomers, but ultimately, player buy-in is out of the design team’s hands; this is Frank Herbert’s world and they’re just adapting it.

TGG REVIEW
8 TGG SCORE
0 VISITORS' SCORE (0 votes)
Summary
Dune - Adventures in The Imperium hits all of the right notes to be a great adaptation and that, ironically, manages to be both its greatest strength and a major weakness.
REVIEW SCORE
What people say... Leave your rating
Sort by: