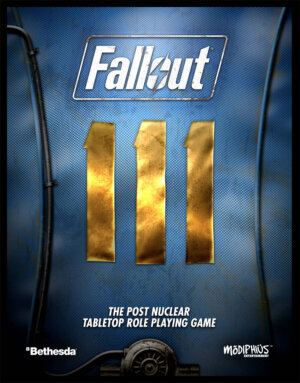 Developing any game is a challenge, but adapting a beloved, if recently beleaguered, franchise piles on new complications. Modiphius, however, manages to thread the needle, delivering a game that feels faithful to its source material even as it carves an identity of its own, Fallout: The Roleplaying Game feels like a love letter to Fallout’s spirit and atmosphere, powered by a system that models without mimicking.

At its core, Fallout runs on an elegant 2D20 system. When attempting a skill test, players add together their 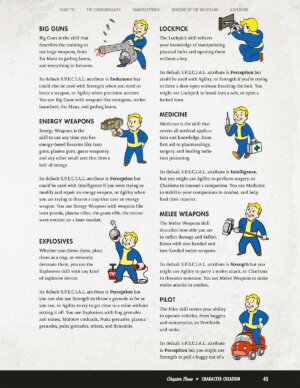 relevant attribute (S.P.E.C.I.A.L of course makes a return) and skill score; any result rolled below that value on an individual die counts as a success, though players may spend Action Points to roll additional dice or Luck to re-roll a poor result. Despite a distinct mechanical difference, the result is an adaptation that remains true the overall feel of the source material and is easy to pick up as well as teach.

The clear line of inheritance from desktop to tabletop extends to the book’s visual design and aesthetic sensibilities as well, with fonts, colors, and the iconic Vault Boy illustrations all serving as an obvious reference point. Even the decision to put the signature “Please Stand By” test pattern as end papers helps drive home the message that this is indeed the Fallout fans know and love. Concept and in-game art from Fallout 3 and 4 also make an appearance, adding to the atmosphere while reinforcing brand cohesion. While the rather bland choice in cover imagery may disappoint some, it is nevertheless an understandable one, given the book’s setting.

That being said, Fallout: The Roleplaying Game does assume something of a familiarity with the video game in establishing its setting. While later sections offer a far more in-depth overview of the various players, both past and present, the initial setting description feels too light to provide a feel for the world; however, given the odds of a truly uninitiated player coming to the table, this is likely a wise design decision.

Arguably, the game’s greatest strength lies in its ability to leverage the comparisons that inevitably arise. Gameplay is explained in simple, easy to understand language and generally supported by examples populated with Fallout 4 NPCs. Where common video game items, such as Rad-Away or stimpaks might impact play, relevant additional information is included just as the question would naturally arise via a smartly designed callout box. 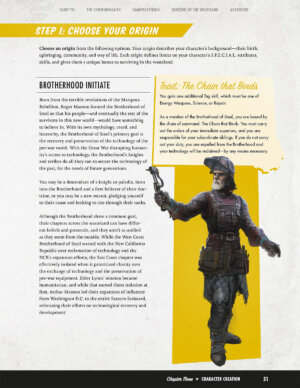 Though the core book does focus primarily on the Commonwealth and its factions and locations, it’s readily apparent that the writers are fans of the complete series to date, including references to every game from the original Fallout through ’76. Likewise, the writers also don’t shy away from calling attention to the series’ less traditionally post-apocalyptic elements, such as the distinctly Lovecraftian flavor of certain locations, people, and events. An ambitious GM with sufficient knowledge of any of the games could easily port them to the tabletop’s ruleset, allowing play to stretch from the Commonwealth to the Capital Wasteland to the New Vegas Strip —a possibility the writers explicitly account for in their introduction to the game.

This isn’t to suggest that the included setting information is in anyway lacking, however, Detailing factions, corporations, and locations, Fallout’s writers provide vital color commentary and no shortage of potential plot hooks.

The only real substantive hitch comes in the form of an un-hot linked PDF. While the book benefits from sensible organization and a clean layout, it is nevertheless a 438 page tome, creating some minor annoyances when reading on a screen. Standalone quick reference tables would likely eliminate the bulk of this friction.

Fallout: The Roleplaying Game ports the classic video game franchise to a new medium with flare and style. Fans who long for the halcyon days before Bethesda will be pleased with the meatier support for roleplaying and the well-designed combat mechanics while Bethesda diehards will relish in seeing the familiar worlds of the Capital Wasteland, the Commonwealth, and post-nuclear Appalachia given fresh life. Bolstered by a writing team who bring an evident passion for the franchise and a clarity of vision to the material, Fallout: The Roleplaying Game is a slam dunk for series fans and a strong standalone for those coming in fresh.