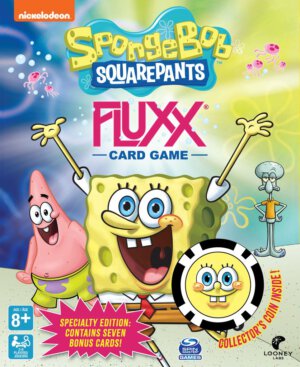 2:14 How to play and discussing the game
16:32 Final thoughts and review score

TGG REVIEW
7 TGG SCORE
0 VISITORS' SCORE (0 votes)
Summary
While the new SpongeBob edition of Fluxx certainly won't change anyone's mind if they've played any other editions. Fluxx is a light and fun card game full of chaos. Gamers who don't like seat of the pants gameplay probably won't care for Fluxx, while those who get a kick out of the rapidly changing rules and win conditions of the game will enjoy the experience. Fans of the Nickelodeon series will certainly want to give SpongeBob Squarepants Fluxx a go.
REVIEW SCORE
What people say... Leave your rating
Sort by: