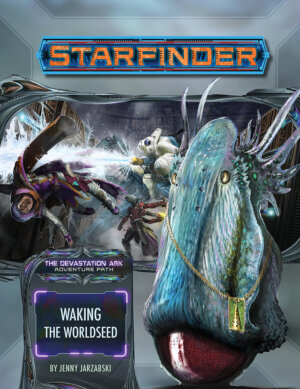 The past proves it is never truly done with us in Waking the World Seed, the first chapter in Starfinder’s The Devastation Ark adventure path.

An apparent winter wonderland on newly terraformed Jedarat conceals a deadly secret, revealed when a team of experienced xenoarchaeologists find themselves trapped in a forgotten underground facility. With an unknown virus running rampant though Jedarat’s tech, players take on the role of adventurers hired as skilled “troubleshooters,” sent in to rescue the scientists and discover the source of the infection.

In the interest of maximum accessibility, this will be a spoiler-free review. Reviews of subsequent adventures in this path, however, will not be. 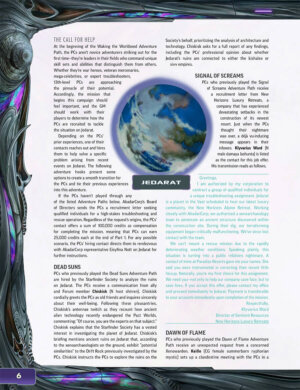 The journey into the facility begins at the New Horizons Command Center, established in a makeshift chalet. Players meet with Eisyfina Nott, their contact, and receive a briefing on the situation before heading out into the harsh snowy wonderland.

The journey to the facility offers GMs a tremendous amount of leeway in approaching the tale. There’s room here for both whimsy and humor, along with a growing sense of dread and unease. Jenny Jarzabski has done a wonderful job peppering in setting details —including caroling holographic elves who’ve begun to take a turn for the foreboding— and there’s more than enough here for even a first-timer to find success. The threats allow for a multitude of approaches and help to elevate the sense of danger as the adventurers draw nearer.

The facility itself features ample opportunity for exploration as well as combat. The facility’s defenses pose a sizeable challenge and yield appropriately enticing rewards — though it’s the knowledge the adventurers gain from this struggle that will prove most useful in the adventures to come.

For players who have already established characters, Waking the World Seed includes a number of potential plot hooks to bridge past adventure paths to the Destruction Ark, though their inclusion is by no means necessary for an engaging tale.

The book is well laid out and easy to read. Stat blocks follow after descriptions, making it easy for GMs to storycraft with flavor while keeping important combat details close at hand. Additional callout boxes for other commonly asked questions —e.g., handling translation, dealing with discovered technology, etc.— likewise help to ensure a smooth, narrative-focused experience. The character portraits, story world art, and maps are beautifully rendered with plenty of detail to engage the imagination. 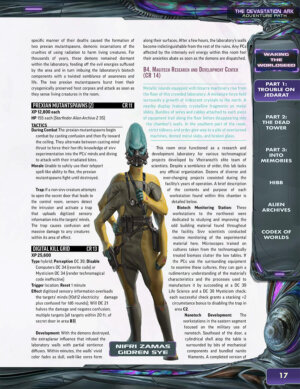 Waking the World Seed offers both a satisfying combat and exploration experience supported by narrative stakes that feel weighty and meaningful. As the “troubleshooting” job grows more and more dangerous, plagued with quantum clones, killer robots, mutantspawns, and kill grids, the imperative to rescue the trapped xenoarchaeologists soon blossoms into a discovery of something much greater. Though the ramp in difficulty from the valley to the facility and beyond may feel (appropriately) daunting, the payoff in a sense of accomplishment for intrepid players stands to be substantial.

Perhaps the adventure’s greatest strength is its ability to reveal key information while maintaining the sense of the unknown. While characters will likely be able to draw conclusions about pieces of the overarching puzzle, these conclusions open the door to more questions — yes, players may be able to determine what kind of experiments went on in a given laboratory, but determining their true purpose is another matter entirely. The steady flow of information keeps players from becoming overwhelmed while still establishing the stakes for the next chapter.

Waking the World Seed sets the stage for a dramatic escalation of danger and tension in The Starstone Blockade will still providing a fun, challenging, and highly engaging story on its own. Perfect for players who enjoy a good mystery with their action, as well as those interested in the at-times surprisingly direct line between the problems of the past and the crises of the present, the opening act in The Destruction Ark adventure path will leave players ready for more.

TGG REVIEW
8.5 TGG SCORE
0 VISITORS' SCORE (0 votes)
Summary
Waking the World Seed sets the stage for a dramatic escalation of danger and tension in The Starstone Blockade will still providing a fun, challenging, and highly engaging story on its own. Perfect for players who enjoy a good mystery with their action, as well as those interested in the at-times surprisingly direct line between the problems of the past and the crises of the present, the opening act in The Destruction Ark adventure path will leave players ready for more.
REVIEW SCORE
What people say... Leave your rating
Sort by: