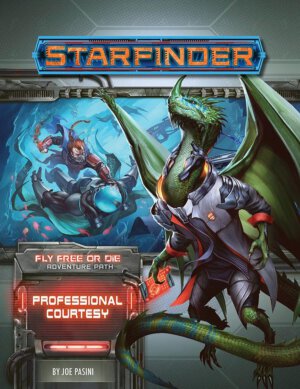 Professional Courtesy opens closer to home than its predecessor. Tarika, the crew’s friend and primary source of work, hasn’t heard from her daughter, Shan, in months. Shan was, at last contact, working for the nefarious EJ Corporation on the water world of Entha. Having discovered the company’s actions on Entha would amount to genocide, Shan was planning to take a dangerous stand against EJ — at which point, Tarika lost contact. She asks the party to travel to Entha, discover Shan’s whereabouts, and bring her daughter home.

Professional Courtesy is already a stronger adventure for the simple fact of having a single narrative goal and throughline. While Merchants of the Void could feel scattered and comparatively low-stakes until its final act, players have a built-in reason to feel invested in Tarika’s plight. Mechanically, the water world setting adds a new twist to combat and problem solving, which helps to keep the gameplay feeling fresh. The risks inherent in working and fighting under water also add palpable tension; factoring EJ’s would-be genocide, Professional Courtesy opens with high stakes and continues to escalate them. From a design perspective, it’s a great example for newer GMs as to how the addition of a single element can so radically alter the framework with which players approach challenges. If using the Fly Free or Die Adventure Path as an introduction to Starfinder, this adventure also allows players the opportunity to test their characters and their understanding of the system in new, more sophisticated ways.

Additionally, it’s nice to see some concrete pay off on the notion of actions having consequences. While explicit instructions are only included actions taken over the course of this particular adventure, leeway is certainly given for GMs to consider the history of the party’s actions throughout the adventure path to this point. Knowing the set up for the broader narrative arc, it will certainly be interesting to see the repercussions of this check play out.

Professional Courtesy marks a milestone in the characters’ progression through the adventure path and it truly feels it. The developers have placed the narrative guns on the wall and now, at the halfway point, are beginning to let them explode. As events progress, the question becomes how will the other disparate moral choice elements, such as the encounter with the crew of the Surnoch’s Tooth at the opening of this adventure, come back to impact the players’ progression. If the ending of this adventure is any measure to go by, the Paizo team intends to deliver.

Benefitting from high stakes and a more focused narrative vision, Professional Courtesy sets the stage for an explosive second half and raises the hope of a reckoning for EJ Corp — or the crew of the Oliphaunt.

TGG REVIEW
8 TGG SCORE
0 VISITORS' SCORE (0 votes)
Summary
Professional Courtesy marks a milestone in the characters’ progression through the adventure path and it truly feels it. The developers have placed the narrative guns on the wall and now, at the halfway point, are beginning to let them explode.
REVIEW SCORE
What people say... Leave your rating
Sort by: