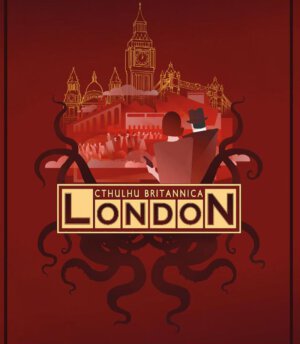 Players: It’s an RPG, so two or more

Cubicle 7 has sliced out a very nice niche for themselves with their line of Cthulhu Britannica releases over the past few years and titles such as Shadows Over Scotland, Folklore, Avalon, and the initial adventure book (bearing the series name) have not only been exceptionally well received by gamers but have won a slew of awards too. Yet it seems the folks at C7 were just warming up 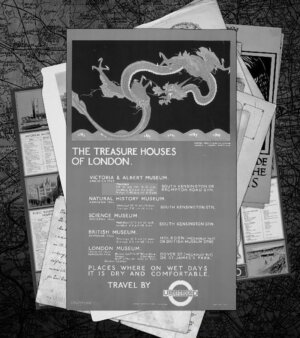 as the London Boxed Set raises the bar set by previous releases. As the name would imply, the boxed set provides anyone running a 1920’s-30’s Call of Cthulhu campaign all they’ll need to drop a group of hardy investigators right into the heart of London.

The Cthulhu Britannica London Boxed Set contains three softcover supplements as well as four period maps, several adventure player aids, and character handouts. Everything presented is top notch, as we’ve come to expect from C7 releases, and the three books – The Investigator’s Guide to London, The Keeper’s Guide to London, and Adventures in Mythos London – are nicely laid out and jam packed with plenty of game relevant content. The black and white artwork within all of the books is solid and provides an added spark to get the old creative juices flowing.

Here’s a breakdown on the books:

The Investigator’s Guide to London – This book clocks in at 184 pages and contains loads of information geared toward bringing London to life during the era. All one would expect to learn of the day to day goings on of the city is included as are plenty of entries you might not expect. Curious as to how to travel throughout the city? Wonder what Londoners did to fill their free time? Have questions about the sights and sounds of the city? What about the changing class system or effects of the Great War? All the answers are contained within. I have to say there’s so much info packed into the page count that one feels like they’re actually reading an in depth book aimed at readers from the era as opposed to an RPG game supplement.

Honestly, as an American, all the player characters in CofC campaigns I’ve run have been American as well but after reading through the investigator’s book I doubt I’d have any trouble rolling out characters from the U.K. I also have to mention that as far as Call of Cthulhu goes I’m not overly keen on having my players reading guides or playbooks; it’s just my thing as I love having the players discover things through gameplay rather than gleaning any sort of foreknowledge from a book. I can tell I’d have a blast leading my American PCs through the discoveries that awaited them in London though.

The Keeper’s Guide to London – While the Investigator’s Guide laid the foundation for common knowledge of London during the period, the Keeper’s Guide pulls back the veil from the occult and Mythos goings on of the city. The authors have done an incredible job in blending reality and Lovecraftian horror together to provide Keepers with excellent adventure nuggets to mine. As an example, I’m sure plenty of people don’t realize there was actually a London Necropolis Railway which was used to transport the dead, as well as mourners, to Brookwood Cemetery outside the city. Just think of all the story ideas that 23 mile rail trip alone can bring to mind!

Dark and macabre people, places, and organizations populate much of the Keeper’s Guide and there’s loads to draw upon to fills years of adventuring for your group. Also included is a timeline of occult and Mythos events for the London area as well and new tomes and spells to sprinkle about. You’ll be amazed at how much is tackled in these 128 pages!

Adventures in Mythos London – The shortest of the three books (96 pages) includes a trio of adventures for use in the setting. The first, Terror on the Thames, works extremely well as an introductory tale for beginning players as well as something the Keeper can use to bring experienced players together as a new group. A pleasant, relaxing evening on the Thames this ain’t! The second adventure, Those Poor Souls Who Dwell in Light, draws the characters into a murder investigation which leads to some mighty unsettling discoveries about a reverend and his flock. This tale does deal with some mature themes so some Keepers might need to tone this one down a bit, depending on the group. The final entry, The Non-Euclidean Gate, places the adventurers on the trail of seven missing pages from a notebook kept by the famed 16th century mathematician and astronomer (and possible magician) John Dee.

The Keeper can use this trio as three stand alone tales, although there are tie ins to connect the second and third together if one wishes. All three do play out as more traditional Call of Cthulhu adventures – heavy on investigation and slowly ratcheting up the horrors – so fans of a more two-fisted action pulp take on the Mythos might be a touch disappointed. This shouldn’t come as any shock to those familiar with the Cthuhu Britannica line though but that’s not to say a clever Keeper can’t beef up the stories with more confrontation if that’s the style of play they enjoy. Also, the boxed set is completely compatible with the recently released 7th edition of Call of Cthulhu so Keepers can jump right in and won’t have to about converting anything over.

Before I finish up with my conclusions on the boxed set I think it’s important I address the elephant (or would that be shoggoth) in the room: the price point. You’re probably thinking $90 is a hefty price for three softcover books with a handful of extras included and, in most cases, I would have to agree. RPG sourcebooks can be so filled with fluff and filler that finding useful,

gameworthy material is like searching for a needle in a haystack. This is far from the case with this release as nearly every one of the four hundred plus pages is packed with well presented and applicable info. Also keep in mind if you purchase the set from Cubicle 7 you’ll receive the PDF download too.

I find the box set to be a must own for Keepers looking to expand their 1920’s CofC campaigns to include the U.K and London in particular. You’ll be taken well beyond the usual overplayed city of peasoupers, Jack the Ripper, and Sherlock Holmes as topics as varied as the continuing breakdown of the age old class system, the rise of Bolshevism and Fascism in Britain, and shopping in London are tackled. You know the authors have done a tremendous job when you can practically turn the city of London itself into a nonplayer character in your games.

Overall the Cthulhu Britannica London Boxed Set is fantastic and an extremely welcome addition to the world of Call of Cthulhu. I even recommend the set for those who might find themselves running other Lovecraft RPGs such as Trail of Cthulhu or Realms of Cthulhu since it’s fairly easy to port the CofC stats over to other systems. I know I sometimes come across as a major cheerleader for Cubicle 7 releases but I’m normally hard pressed to find something from the company which fails to impress. Truthfully, the Cthulhu Britannica London Boxed Set is so good I wish we’d see more companies develop such highly focused and excellently written and organized roleplaying books.

An essential addition to any Call of Cthulhu Keeper's collection. Cubicle 7 has put together an exceptional supplement which brings to life the London of the 1920's and 30's jam packed with useful information and adventure nuggets.